From June ’07 Spotlight: Coming full circle, the 20th Anniversary DVD of Dirty Dancing was released on May 8, and I attended a promotional event at the AMC River East on May 1. The screening room was completely full, and theater reps later told me they had sold out the prior week. When I asked Dori Berinstein about Dirty Dancing, she said: “That project was a labor of love; no one at the time we were working on it had a clue what it was going to become. “

Dirty Dancing has become different things to different people. Many women simply love watching “Johnny Castle” (Patrick Swayze) in action, and the crowd at the River East (at least 90% female) often swooned in unison. I’m not immune; magnified on the big screen Johnny’s every move was magic, but for me, “Baby” (Jennifer Grey) will always be the star of Dirty Dancing.

Every time I see Dirty Dancing (and I’ve seen it many times), it always makes me feel very proud to be Jewish. I love Baby’s interactions with her father “Jake” (played with great menschlikeyt by Jerry Orbach); I treasure knowing Baby’s real name is Frances (after Frances Perkins, the first woman who ever served in a President’s Cabinet); and most of all, I’m elated when Jake apologizes to Johnny (“When I’m wrong, I say I’m wrong.”), turns to Baby and says “You were wonderful!,”and then enfolds his wife “Marjorie” (Kelly Bishop) in a truly sexy “dance space.”

Jewish-American life circa 1963 is well-represented by the guests who spend that summer at Kellerman’s!

Good triumphs over evil, and I have implicit faith that, once the credits start to roll, Frances Houseman sets off to make the world a better place. 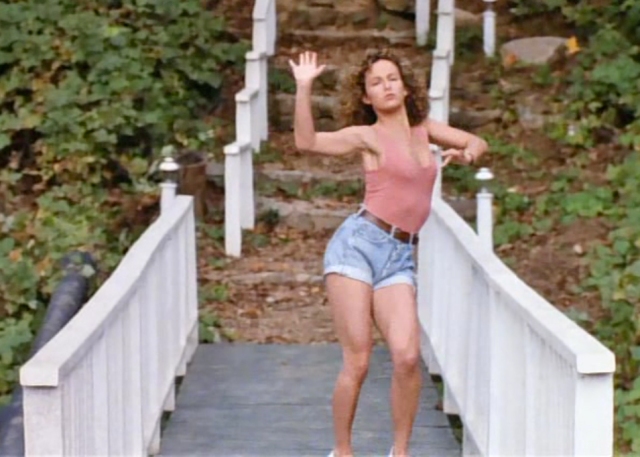