From Apr ’08 Spotlight: Moishe Szelewiansky is happily dancing to a band playing Mariachi-tinged Klezmer music when he has a sudden heart attack, and thus begins My Mexican Shivah (Morirse esta en Hebreo), a wonderful new film playing in this month’s Chicago Latino Film Festival line-up. A pillar of Mexico City’s Jewish community, Moshe ben Yehuda emigrated from Poland in 1936. His home town, Vielun, was the first place the Nazis bombed on the first day of World War II. But that was years ago, and Moishe’s daughter Esther is soon contending with a full house as grandchildren, great-grandchildren, old lovers and lifelong friends congregate for the full seven days of traditional mourning.

My Mexican Shivah is an artful blend of farce and philosophy. People come to Moishe’s funeral obsessed with private problems, but as the yahrzeit candle melts away, immersion in Jewish ritual has a purifying effect. Director Alejandro Springall, working with writer Jorge Goldenberg, lovingly crafted his screenplay based on a novella by Ilán Stavans, and Jacobo Lieberman composed the lively “klezmariachi” music on the soundtrack. Most of the dialogue is in Spanish, but all of the prayers (which are numerous) are in Hebrew, and two elderly Hassids function as a Yiddish-speaking “Greek chorus.”

Although director Springall is a relative newcomer, he’s studied at the feet of a master. He worked on both of Indie icon John Sayles’ Spanish language productions (Casa de Los Babys and Men with Guns) and Sayles is one of Shivah’s executive producers. Like the best of Sayles’ films, Shivah has an enormous cast, every member of which is imbued with felt life. Even as the final credits begin to roll, it’s easy to believe that the characters we’ve met on this journey, major and minor alike, all have arcs that will continue on, even though we won’t be watching. That’s our loss!

See My Mexican Shivah on Monday, April 14 at 6:30 PM or Wednesday, April 16 at 9:00 PM. Both Shiva screenings will be at the Pipers Alley Theatre in Old Town. Also recommended is the Chilean film El Brindis (To Life) playing on Friday, April 11 at 6:30 PM and Sunday, April 13 at 8:30 PM at the Landmark Century Center in Lincoln Park. To order tickets, visit www.latinoculturalcenter.org. 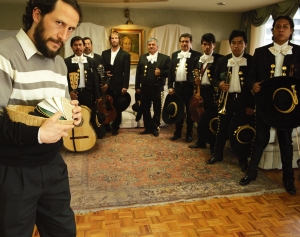