by nightfinder79
Performances
No comments
0 shares 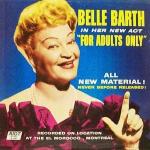 From Sept ’08 Spotlight: “There was two little minks in the woods. A hunter comes by and shoots one and aims at the other. The first mink turns to his friend and says, ‘See you in shul.’” Belle Barth’s Borscht Belt humor typically involved body parts, so this may well be the cleanest joke she ever told, but I think it captures her savvy, self-mocking schvester style. Belle is the missing link between Sophie Tucker and Bette Midler, and I thoroughly enjoyed the new show Belle Barth: If I Embarrass You, Tell Your Friends, presented last month as part of STAGES 2008 (an annual festival of new musicals performed at the Theatre Building Chicago on Belmont).

The book for Belle Barth was written by National-Louis University professor Joanne Koch, with original songs by Ilya Levinson (music) and Owen Kalt (lyrics). I called Joanne afterwards and she told me she started researching Belle’s life when she wrote the play Sophie, Totie & Belle with Sarah Blacher Cohen in the 90s. Although it was a hit Off-Broadway, no one in Chicago ever mounted a full production of Sophie, Totie & Belle. After that, Joanne wrote the book for the musical American Klezmer with Levinson and Kalt. They presented it at STAGES 2004, and polished it up in several LA-based productions. A Chicago production is planned for 2009 with hopes for a subsequent national tour.

We typically think of the 1950s as the calm before the storm, but the winds that eventually blew Donna Reed’s skirts to smithereens didn’t gather momentum over night. Watching Belle Barth, I was always aware of two more Jewish-American women, also big and brassy, waiting in the wings: Bella Abzug and Betty Friedan. Did either of them ever see Belle perform live? I can’t say, but I’m willing to bet they both had copies of her best-selling LPs.