Scribes of the Dead Sea Scrolls

From July ’10 Spotlight: My Memorial Day Weekend began early with a trip to the Milwaukee Public Museum to hear Professor Emanuel Tov of Hebrew University lecture on “The Scribes of the Dead Sea Scrolls.” After decades of analysis, the Dead Sea Scrolls, originally discovered in 1947, are still a source of public fascination and scholarly controversy.

Among the biggest debates: who wrote the scrolls? Were they written by members of the nearby Qumran community, or were they brought to Qumran from Jerusalem? In his May 27 lecture, Tov gave reasons why he believes “two-thirds of the scrolls were brought to Qumran from outside.” In this he agrees with University of Chicago Professor Norman Golb (head of the Dead Sea Scrolls Project at the Oriental Institute), the most-forceful advocate of “the Jerusalem hypothesis.”

Before heading north, I listened to a newly-released course from The Teaching Company, in which Professor Gary Rendsburg (Chair of the Department of Jewish Studies at Rutgers) patiently guides us from “The Discoveries and Their Significance” (lecture one) through “Scroll Fragments and a New View of Judaism” (lecture 24).

“One would think that one’s religious affiliation would not matter in scholarship—that scholars seek objective truth without theological or denominational bias,” Professor Rendsburg says. “Unfortunately, that is not the case.” The Christian scholars “understood the Qumran community as an early celibate monastery… Jewish scholars paid more attention to the Halakhic material.”

Far from arcane, study of the scrolls provides great insight into the Roman conquest of Israel during the volatile period encompassing the destruction of the Second Temple, the birth of Christianity, and the rise of Rabbinic Judaism. Click HERE to order The Teaching Company’s course (available in either CD or DVD format).  Click HERE to learn more about Professor Golb’s research. (You can also download relevant papers in pdf format.) 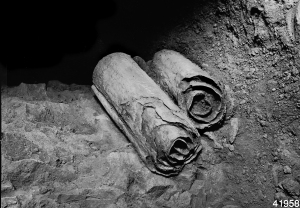