by TziviahHuttner
Exhibits
No comments
0 shares

According to Chief Curator Stephanie Smith: “Feast is emblematic of the larger trend of blurring art and life-art that moves beyond the space of the museum.” In this case, while “calling attention to larger social and political issues,” Smith said, “the boundaries of what constitutes ‘art’ have expanded [to include] meals as a material for art.”

In his Enemy Kitchen project, for example, Rakowitz (whose grandfather fled from Iraq in 1946) asks Iraqi immigrants to cook some of his mother’s favorite recipes with him. American veterans of the Iraq War then act as servers, using paper plates modeled on Saddam Hussein’s china!

According to his website: “The project functions as a social sculpture: while cooking and eating, we engage each other on the topic of the war and draw parallels with our own lives.”

Prior to Feast, Rakowitz’ work has appeared in worldwide venues including Innsbruck, Istanbul, Paris, San Francisco, Sydney, and Torino, as well as MoMA (New York). But, says Smith: “This is the first time Enemy Kitchen has been part of a public project and not just a private workshop.” 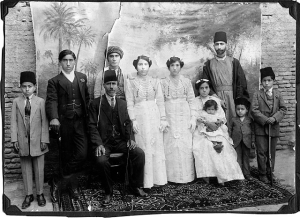 To learn more about Feast, visit the Smart Gallery website.

I downloadeded the photo of Rakowitz’s Iraqi family from his website.