Tonight we read from Parsha Pinchas which is in The Book of Numbers.

We are in that part of the Torah—on the steppes of Moab, at the Jordan near Jericho—where “the Lord said to Moses and to Eleazar son of Aaron the priest, ‘Take a census of the whole Israelite community from the age of twenty years up, by their ancestral houses, all Israelites able to bear arms.’

When we reach the Descendants of Manasseh (the son of Joseph), the text says: 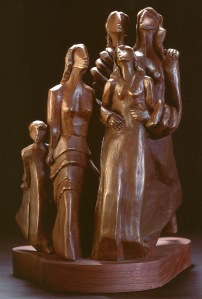 “Now Zelophehad son of Hepher had no sons, only daughters. The names of Zelophehad’s daughters were Mahlah, Noah, Hoglah, Milcah, and Tirzah.”

A few paragraphs later, we read these names again:

“The daughters of Zelophehad, of Manassite family—son of Hepher son of Gilead son of Machir son of Manasseh son of Joseph—came forward. The names of the daughters were Mahlah, Noah, Hoglah, Milcah, and Tirzah.”

“They stood before Moses, Eleazar the priest, the chieftains, and the whole assembly, at the entrance of the Tent of Meeting, and they said, ‘Our father died in the wilderness. He was not one of the faction, Korah’s faction, which banded together against the Lord, but died for his own sin; and he has left no sons. Let not our father’s name be lost to his clan just because he had no son! Give us a holding among our father’s kinsmen!’

Moses brought their case before the Lord. And the Lord said to Moses, ‘The plea of Zelophehad’s daughters is just: you should give them a hereditary holding among their father’s kinsmen; transfer their father’s share to them.’

‘Further, speak to the Israelite people as follows: ‘If a man dies without leaving a son, you shall transfer his property to his daughter.’”

The first thing I want to say about this is that I only found out about the Daughters of Zelophehad a couple of years ago. As a lifelong Jewish Feminist, I thought I knew the women of the Torah pretty well. But somehow I don’t remember hearing anyone talk about the Daughters of Zelophehad before overhearing a snippet of conversation about them one day when I was waiting for my husband Richard while he was in Torah study.

And for all my research on Fiddler on the Roof, which by that time had been going on for almost a decade, no one ever thought to tell me there were five daughters mentioned multiple times by name in the Book of Numbers!!!

Now I realize that the discussion in this parsha is focused on male genealogy. In fact, the whole paragraph I read from above is as follows:

But still, any women who has read her Jane Austen must surely be startled:

“And the Lord said to Moses, ‘The plea of Zelophehad’s daughters is just: you should give them a hereditary holding among their father’s kinsmen; transfer their father’s share to them.’

‘Further, speak to the Israelite people as follows: ‘If a man dies without leaving a son, you shall transfer his property to his daughter.’”

Wow! And just think of the sheer chutzpah of these daughters: “They stood before Moses, Eleazar the priest, the chieftains, and the whole assembly, at the entrance of the Tent of Meeting, and they said ‘Give us a holding among our father’s kinsmen!’

Of course there is some subsequent pushback. A few chapters later, in Parsha Mas’ei, the story of the Daughters of Zelophehad ends as follows:

“The family heads in the clan of the descendants of Gilead son of Machir son of Manasseh, one of the Josephite clans, came forward and appealed to Moses and the chieftains, family heads of the Israelites. They said, “The Lord commanded my lord to assign the land to the Israelites as shares by lot, and my lord was further commanded by the Lord to assign the share of our kinsman Zelophehad to his daughters.

So Moses, at the Lord’s bidding, instructed the Israelites, saying: “The plea of the Josephite tribe is just. This is what the Lord has commanded concerning the daughters of Zelophehad: They may marry anyone they wish, provided they marry into a clan of their father’s tribe. No inheritance of the Israelites may pass over from one tribe to another, but the Israelites must remain bound each to the ancestral portion of his tribe. Every daughter among the Israelite tribes who inherits a share must marry someone from a clan of her father’s tribe, in order that every Israelite may keep his ancestral share. Thus no inheritance shall pass over from one tribe to another, but the Israelite tribes shall remain bound each to its portion.”

The daughters of Zelophehad did as the Lord had commanded Moses: Mahlah, Tirzah, Hoglah, Milcah, and Noah, Zelophehad’s daughters, were married to sons of their uncles, marrying into clans of descendants of Manasseh son of Joseph; and so their share remained in the tribe of their father’s clan.

These are the commandments and regulations that the Lord enjoined upon the Israelites, through Moses, on the steppes of Moab, at the Jordan near Jericho.”

But here are two things I want you to notice. First, all five names are to be read three times—Mahlah, Tirzah, Hoglah, Milcah, and Noah—so they are known to us as individuals and not just as the daughters of a father whose name was Zelophehad.

And second, Moses specifically says: “They may marry anyone they wish, provided they marry into a clan of their father’s tribe.”

These women—and the women after them—have the property, so the power to choose remains in their hands… at least until they make a choice of husband.

This is not what we were told was our “Tradition” in Fiddler on the Roof, where the daughters explicitly say: “And who does Mama teach, to mend and tends and fix, preparing me to marry whoever Poppa picks?”

So my reading of the story of the Daughters of Zelophehad has lead me to ask, once again: Who decides? We can find so many things written in the Torah, and yet even while claiming to be guided only by Scripture, some people take it on themselves to decide that some teachings are more important than others.

But it’s perfectly fine to disempower women and rob them of their patrimony, even though that’s not only “in the Bible,” it is said to be HaShem talking directly to Moses: “And the Lord said to Moses, ‘The plea of Zelophehad’s daughters is just!”

Yet even now, a group in England called The Hares is trying to overturn the rules by which property is passed down in moneyed British families. They have brought what they call “Lady Mary’s Case” (in honor of Lady Mary Crawley of DOWNTON ABBEY to the House of Lords… but so far no one seems to care…

Last week, we learned about Balaam’s donkey. Rembrandt did a famous painting about this creature and rightly so. But why didn’t Rembrandt—or for that matter any other famous male painter—choose the Daughters of Zelophehad—who are mentioned three times by name—as a fit subject?

I leave that to you as an Open Question for discussion at tonight’s Oneg Shabbat.

Those are the final words of my prepared text, but now I want to add a bit more.

I am well aware that the story of the Daughters of Zelophehad appears in the context of a census: “the Lord said to Moses and to Eleazar son of Aaron the priest, ‘Take a census of the whole Israelite community from the age of twenty years up, by their ancestral houses, all Israelites able to bear arms.’”

And as the end of this first paragraph of the parsha makes clear, the purpose of this census is to prepare the sons of the sons of Jacob for a military takeover of the Promised Land. These words weighed heavily on me in the days since last Friday (when Adrienne and I agreed that I would do this week’s D’var Torah). With everything happening in the Middle East this past week, with all the deaths and the injuries and the bombs falling relentlessly on our beloved Israel, I asked myself if it would be frivolous to talk about the Daughters of Zelophehad? I asked myself if I should say something instead about the current situation? But what could I say? Discussing the current situation in the Middle East is way above my pay grade!

So I decided to stick with the Daughters of Zelophehad, and now I see that was a blessing. I didn’t know—when I arrived tonight—that our Sanctuary would be off-limits due to construction. I didn’t know—when I invited some personal friends both within our Beth Emeth family as well as from other parts of our city to join us tonight—that we would all be squeezing into this little room. But now I think this brings us all closer to what is happening all over Israel and across the Jewish world tonight as other people in other places make do in makeshift locations of their own.

Studying our weekly Torah portion—which this week includes the story of the Daughters of Zelophehad—this is what we do. This is part of what has keep us strong over the centuries. Whatever happens around us, we must “Keep on Keeping On.”

Credits: My most sincere thanks to sculptor Judith Klausner and painter Iris Wexler for granting me permission to use copies of their work to illustrate my own thoughts on the Daughters of Zelophehad.

Click HERE to read my presentation “Tevye’s Daughters: No Laughing Matter” for the Temple Beth Emeth Sisterhood (in which the Daughters of Zelophehad play a prominent role).

The translation I used for this D’var Torah was taken from the JPS Tanakh.