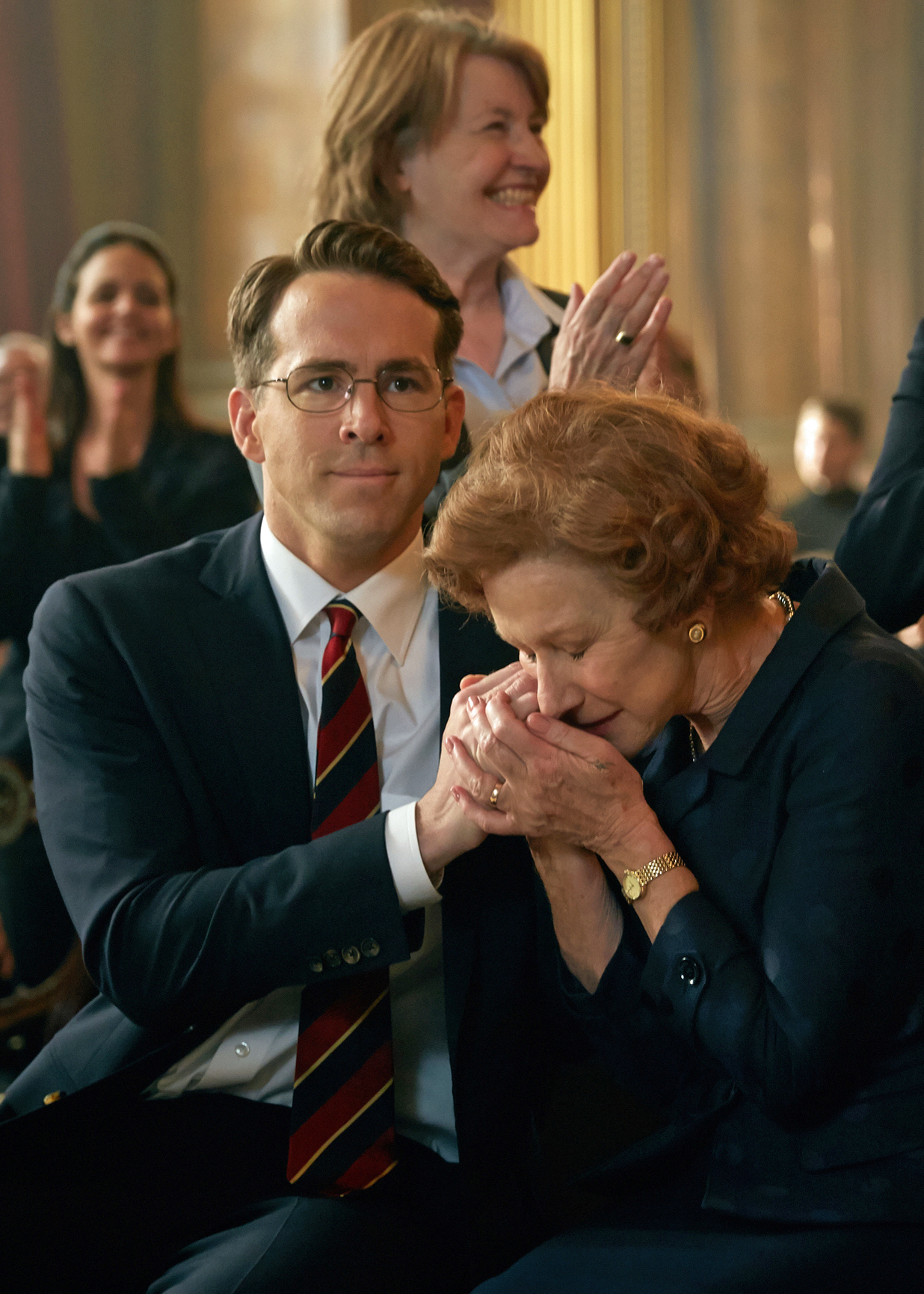 Adele Bloch-Bauer died of meningitis in 1925 at the age of 42. As the wife of wealthy businessman Ferdinand Bloch-Bauer, she was one of the most highly lauded hostesses of Viennese society in its period of greatest artistic and intellectual achievement. Among the luminaries who attended Adele’s salons are names still famous today, including musicians such as Gustav Mahler and Richard Strauss, and painters such as Egon Schiele and Oskar Kokoschka. In 1907, in the midst of his “Golden Phase,” painter Gustav Klimt, the founder of the art movement known as the Vienna Secession, did his first portrait of her, and this one painting—“Portrait of Adele Bloch-Bauer I”—has come to represent the entire period.

So where does this painting belong, now that the Vienna Secession and all who were a part of it have passed into history? This is the challenging question taken up in the new drama Woman in Gold.

Adele and Ferdinand Bloch-Bauer, all of their relatives, and most of their friends were Jewish. It was, in fact, the astonishing wealth of self-made Jewish entrepreneurs which fueled the Vienna Secession. In 1925, when Adele died so tragically young, Jews had every reason to believe that they had built a permanent place for themselves in a modern Austrian nation newly born in the cataclysmic aftermath of World War I. But less than ten years later, the Nazi Party had assumed control of Germany, and three years after that Germany annexed Austria in the Anschluss of March 1938. By the time Ferdinand Bloch-Bauer died in Switzerland in November 1945, the Jews of Vienna had either fled or perished in War World War II, and almost all of their property—including “Portrait of Adele Bloch-Bauer I” and four other Klimt paintings commissioned by and paid for by Ferdinand Bloch-Bauer—had been confiscated.

So on one level, Woman in Gold is yet another film about the Holocaust (as if there can ever be too many). Structurally it is a court room drama which chronicles the efforts of Ferdinand Bloch-Bauer’s surviving heirs to prove their claim to some of his expropriated property. But it is also more: Woman in Gold is really a meditation on the meaning of the term “restitution.” Once something is stolen, can it ever be restored?

We meet Maria Altmann three times in the course of Woman in Gold. Early scenes show young Maria Bloch (played by actress Nellie Schilling) growing up in a world of luxury and refinement. Her mother Therese was Adele’s older sister, and Adele, who was childless, doted on her two nieces Louise (born in 1908) and Maria (born in 1916). The famous Klimt portrait of her aunt is already part of young Maria’s world, and the woman who posed for it, the real woman she knows personally as “Aunt Adele,” is always as perfectly adorned as Klimt painted her.

By 1937, when Maria (now played by Tatiana Maslany) marries handsome Fritz Altmann (played by Max Irons), Adele has become an icon as well as an omnipresent memory. Maria’s loving Uncle Ferdinand gives her the necklace seen in the portrait as a wedding gift. Their wedding reception is a high society event with a dash of Klezmer. And then the bottom falls out of their world. Maria and Fritz flee, leaving everyone and everything behind them.

California, 1998. Louise has died, leaving letters from Uncle Ferdinand in the boxes now stored in Maria’s bungalow. Maybe Randy, the son of Maria’s friend Barbara, can take a look at these papers and give her some advice?

And so it begins. At first Randy is none too pleased. “Thanks, Mom,” he mutters to himself after promising Barbara that he will call Maria and do what he can. But then he googles, realizes the market value of the paintings in question, and sets his shoulder to the wheel. 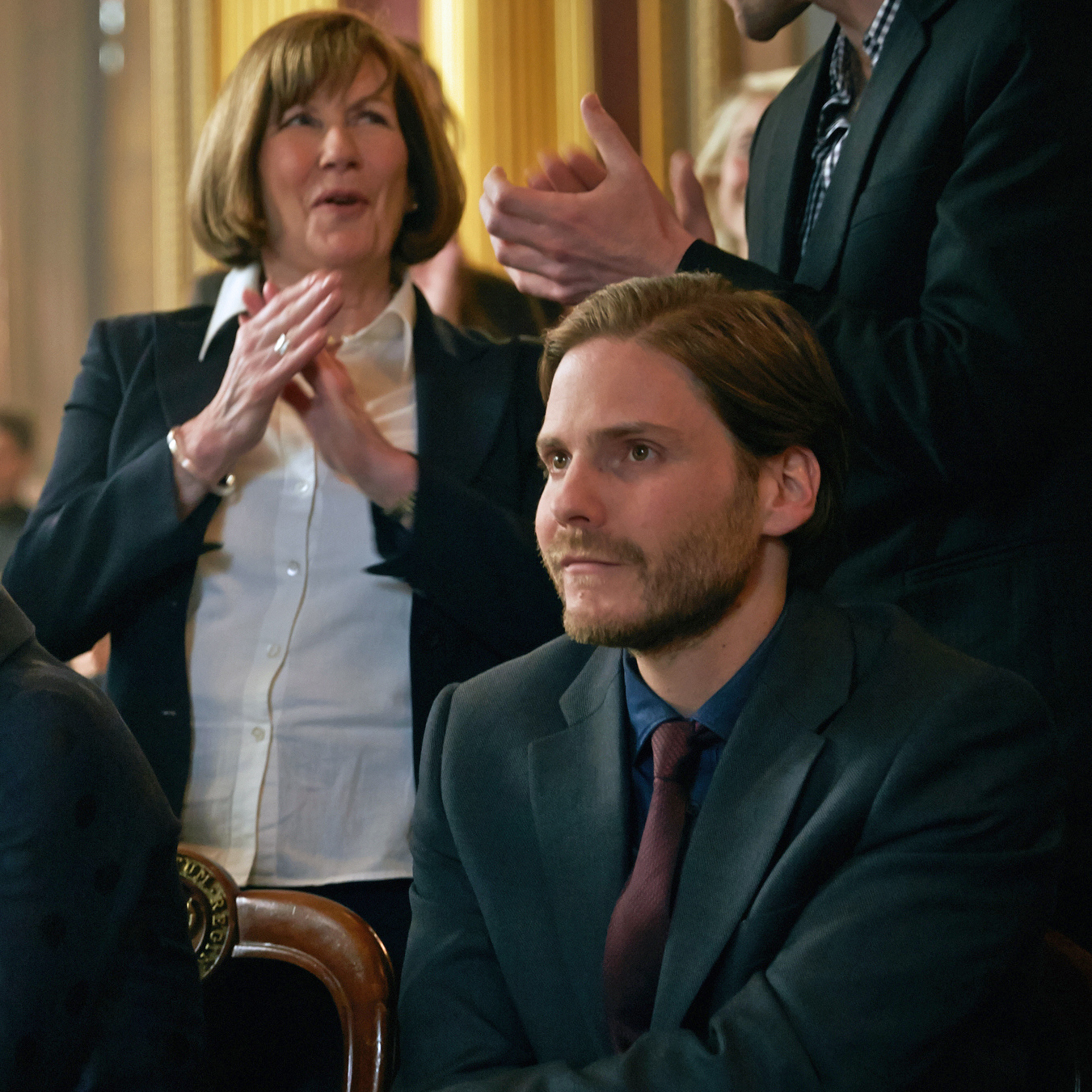 In the battle that ensues, Maria never changes. Mirren plays her as an archetypal “Yekke” (Yiddish slang for the kind of German Jew who is a bit too high-handed, dictatorial, and mercurial). Maria is always precise about both her diction and her appearance, and she is strict in her demeanor.

Randy, on the other hand, changes a great deal overtime. By the end, Randy has become a mensch, not only coming into his own as a man but also assuming his appropriate role as member of the Jewish community. E. Randol Schoenberg, it turns out, is not just any Schoenberg, he is the grandson of composer Arnold Schoenberg, and thus is heir to a cultural legacy as exalted as Maria’s own.

Maria and Randy make their case. This will not be big news to anyone who knows that “Portrait of Adele Bloch-Bauer I” now hangs in the Neue Gallerie, a Manhattan museum devoted to 20th Century German and Austrian art. So the suspense lies not in the outcome but in the process. How does fighting for his own legacy change Randy’s view of himself? How does restoration of property lead to dignity reclaimed?

Woman in Gold is not a documentary, it is a narrative feature. In other words, a very complicated story is reduced to a runtime just under two hours. So have some of the facts of the matter been stretched? Definitely. But is the core solid? Yes.

When I reviewed Portrait of Wally, an excellent 2012 documentary by Andrew Shea that deals with similar issues, I felt there was closure in the return of an Egon Schiele painting to Vienna. I feel the same way about Woman in Gold even though the end result is the opposite. The Vienna of Adele Bloch-Bauer—the Jewish Vienna of the early 20th Century—can never be restored. That spirit, in so far as it lives anywhere, now lives in New York.

To learn more about the case, read Maria Altmann’s obituary in the 2/17/11 issue of The Economist, or watch the 2008 documentary Adele’s Wish. 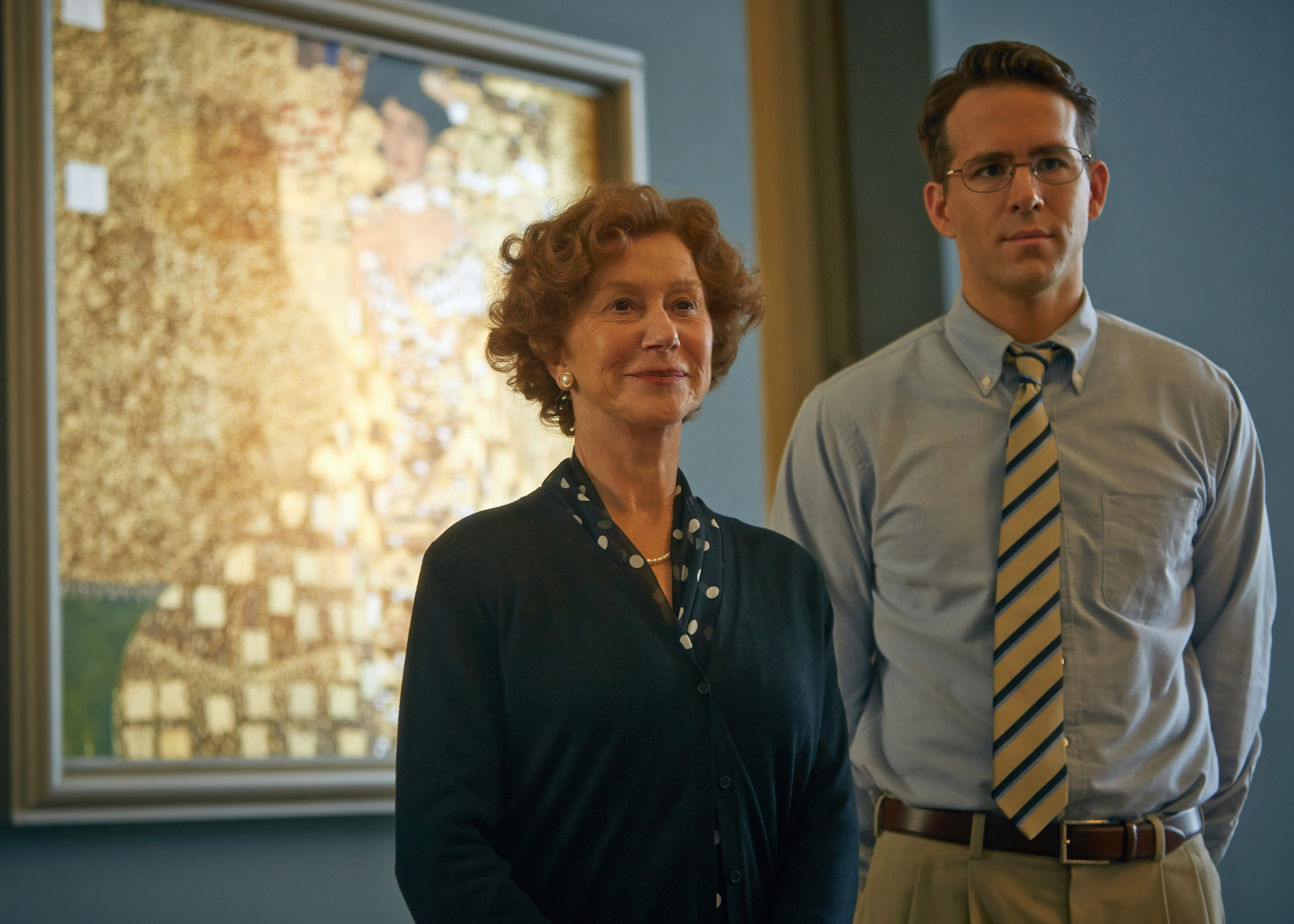 Bottom Photo: Helen Mirren and Ryan Reynolds stand in front of Gustav Klimt’s “Portrait of Adele Bloch-Bauer I” (which now hangs at the Neue Gallerie in Manhattan).

Q: Does Woman in Gold pass the Bechdel Test?

In what ways have some of the facts of the matter been stretched? Woman in Gold presents a reasonable account–albeit highly condensed–of the legal case. Where it most differs from reality is in its depiction of Maria’s family situation.

Although we only meet, Maria and Louise in Woman in Gold, Therese and her husband Gustav actually had five children (Charles, Leopold, Louise, Robert, and Maria), so Uncle Ferdinand had five nieces and nephews on Adele’s side, and other relatives/heirs as well.

Even more important, Maria and Fritz had four children of their own (Chuck, Jim, Marguerite, and Peter). Louise also had two children (Francis and Nelly), and Maria’s brothers had children too. S0 when the case was finally settled, there were a great many people who materially benefited from the sale of the Klimt paintings (including, but not limited to “Portrait of Adele Bloch-Bauer I”).

Without doubt, Maria was the focal personality (certainly for the media). But to not show her consulting on Next Steps at any point with any of the other heirs–even her own children–is a bit disingenuous.