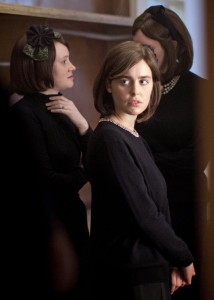 Two sad-sacks meet one day in the middle of a slushy Montreal winter. She is a young woman from a Hasidic family and he is a much older man from a wealthy Christian family. Their relationship is presented as life-altering, but with no backstory and minimal character development, it’s hard to care. Feh! (JLH: 2.5/5)

Award-winning Canadian film written and directed by Maxime Giroux. Two sad-sacks meet one day in the middle of a slushy Montreal winter and begin a life-altering relationship. Fine.

But long, drawn-out scenes of them staring longingly at each other hardly compensate for total lack of backstory and character individuation.

Who are these two people? What have they been doing with themselves before their hearts burst into flames at the deli?

It’s not enough to show that “Meira” (Hadas Yaron) comes from a Hasidic family. Plenty of women from Hasidic families live very happy lives. If we are to believe that Meira wants something different, then we must know more about her.

And “Felix” (Martin Dubreuil) has returned to Montreal to sit at his father’s deathbed. Fine again. But where was he before that? How old is Felix and how long has he been away?

Sorry to say, I couldn’t get a handle on this moody mess. I watched to the end, even though I quickly became bored and restless within the first few minutes, because that’s my job. And then I went back a second time because I wanted to make sure that I hadn’t missed any plot points that would change my mind 🙁

Slamming this film does not make me happy. All of the acting is quite good. Hadas Yaron is as lovely as Meira as she was as “Shira” (the role in Fill the Void that brought her a coveted Ophir Award in the Best Actress category for her very first feature film). Martin Dubreuil (“Felix”), on the other hand. has a very long resume on IMDb, although I don’t recognize any of the films listed there. He had several moving moments as Felix–especially at the very end–so I am sure he could have held up his end if writer/director Maxime Giroux had given Felix more substance.

However, the two break-out stars of Felix & Meira  for me were neither Felix nor Meira, but Luzer Twersky (as Meira’s husband “Shulem”) and cinematographer Sara Mishara.

I am sure some members of the audience will perceive Shulem as “the villain.” But is it really appropriate to blame a man for being faithful to the traditions of his community, especially when we know nothing about Meira’s family and how she came to be Shulem’s wife in the first place? The Shulem I saw–the Shulem created by Luzer Twersky–was genuinely concerned about his wife, and far more patient and supportive than many others in his community–both men and women–would likely be in reality. And the final moments of the film seem to indicate that Shulem’s concerns for his wife–and for their daughter–were spot on.

Bottom Line: IMHO, Maxime Giroux has let down the talented members of his cast and crew, but hopefully the buzz Felix & Meira has generated at numerous film festivals–however much it may baffle me–will be good for all of their careers!

Top Photo:  “Meira” (Hadas Yaron), a wife among other wives, wearing a proper dress and wig.

Not really. Besides Meira, the only female character with a substantive role is Felix’s sister “Caroline” (Anne-Elisabeth Bosse), but Meira and Caroline only have minimal contact with each other.

Meira also interacts with someone named “Ruth” (Melissa Weisz), but it hard to call these interactions actual conversations. Ruth mostly admonishes Meira, telling her to “straighten up and fly right” (as it were). Is she a relative? Is she someone related to Meira? Is she someone related to Shulem? Obviously Shulem trusts Ruth because he leaves his child with Ruth when he goes to look for Meira… but no details are ever provided…

Towards the end of Felix & Meira, Meira’s husband Shulem comes to Felix’s apartment for a man-to-man talk. Felix offers Shulem a glass of wine with these words: “It’s from my father’s cellar. It’s Kosher.” Shulem refuses, of course. He has no interest in any food or drink that Felix might offer at this moment.

Nevertheless, a surprising number of critics writing about Felix & Meira take this as a true statement, and thereby draw the conclusion that since Felix’s father was Jewish Felix himself is at least half-Jewish as well. But thinking that someone with the name “Theodore Saint-Francois” was Jewish always seemed like a bit of a stretch to me…

So I went back to see Felix & Meira a second time just to be sure I hadn’t missed anything. By watching Felix’s body language at that specific moment, I have come to the conclusion that the reference to Kosher wine is an ironic line Felix tosses in due to tension. He is understandably nervous about being alone with Shulem, so he says something “to break the ice.” It doesn’t work, making this line (“It’s from my father’s cellar. It’s Kosher.”) just another indication of Felix’s many failures.