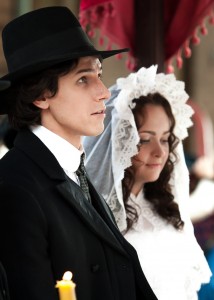 A live-action children’s storybook from Russia, and a storybook for very young children at that. Directed by Aleksandr Mitta. Screenplay by Mitta in collaboration with Kristina Schneidermann who also co-stars as “Bella Rosenberg Chagall.” (JLH: 2/5)

Aleksandr Mitta’s new film Chagall-Malevich is like a live-action children’s storybook, and a storybook for very young children at that. So it’s a “Good News/Bad News” problem for a film critic. The good news is that it is bright, colorful, and engaging. The bad news is that the narrative is ludicrously simplistic, and the characters never come to life.

Right after the Russian Revolution, painter Marc Chagall returned to his home in Vitebsk, which was then part of the newly formed USSR–Union of Soviet Socialists Republics aka the “Soviet Union”–but is now in a country called Belarus. His intention was to run an art school in the belief that his students should nourish the soul of the Revolution while other comrades worked to nourish its body.

Of course, the school was a dismal failure. By 1920, Chagall was in Moscow, where he painted the famous mural called Music for the State Jewish Chamber Theater–a painting we now know affectionately as “The Fiddler on the Roof”–as well as additional murals, costumes, and sets. By 1922, Chagall had left the USSR forever and was on his way back to Paris. Other than a brief visit near the end of his life, he never returned.

So it is a fascinating story… but mere hints of it are actually in this film. Instead we get cartoonish characters who run hither and yon on a cheap set spouting slogans; revolutionary, counter-revolutionary, they all sound equally ridiculous. Then, every once in a while, the powers-that-be march someone off to a verdant cliff, execute him by firing squad, and throw his body into the sparking river below. Since there’s no rhyme or reason to this, maybe they do it to break the monotony?

Chagall’s constant companion through-out is “Bella Rosenberg” (Kristina Schneidermann), the beautiful young woman he pines for during the brief opening sequence set in Paris, and who he marries as soon as he returns home. As played by Leonid Bichevin, Marc Chagall is a boyish luftmensch–Yiddish for “airhead”–while Bella is always practical, scolding and nagging like a stereotypical Jewish mother. Yes, their daughter is always with them too, but she’s never given a name. (FYI, her name was Ida.)

While Chagall was in Paris, Bella allowed herself to be romanced by a young poet named “Naum” (Semyon Shkalikov). Rejected and dejected, Naum turns to guns, and soon enough he is a Soviet Apparatchik. And so Bella continues to flirt with Naum to take the heat off her husband, all of which is as embarrassing to watch as it is predictable.

Then artist “Kazimir Malevich” (Anatoliy Belyy) appears on the scene, promulgating a doctrine called “Suprematism.” This leads to full out combat between Chagall’s humanistic iconography–whimsical flying lovers and all that “fuzzy” stuff–versus Malevich’s hard-edged slashes of pure color. Students pick sides, fighting each other on the streets, and even whacking each other with birch branches in the bathhouse!

Then Leon Trotsky passes by in a train on his way to the Polish Front, signalling that the time for provincial arguments is over. There is to be no individual expression in the midst of war with reactionary forces both at home and abroad. Of course, Bella is frantic, but Marc remains totally calm. He gathers Bella and Ida under his wing… and they literally float away!

Honestly: Regardless of good intentions, 119 minutes of this was painfully difficult to watch. The screenplay by well-known director Aleksandr Mitta and first time screenwriter Kristina Schneidermann (who also stars as Bella) is a joke, and all the actors suffer for it.

But that said, the animated sequences–in which paintings by both Chagall and Malevich literally come to life–are often quite beautiful.

Aleksandr Mitta’s name was new to me, but a quick trip to IMDb shows him to be an elderly Jewish gentleman who once had an international career. In 1965, he even won a grand prize in Venice. Why he came back from a decade of presumed retirement to make this film is beyond me. As a Chagall-lover, I wish I could tell you to watch it… but I can’t 🙁 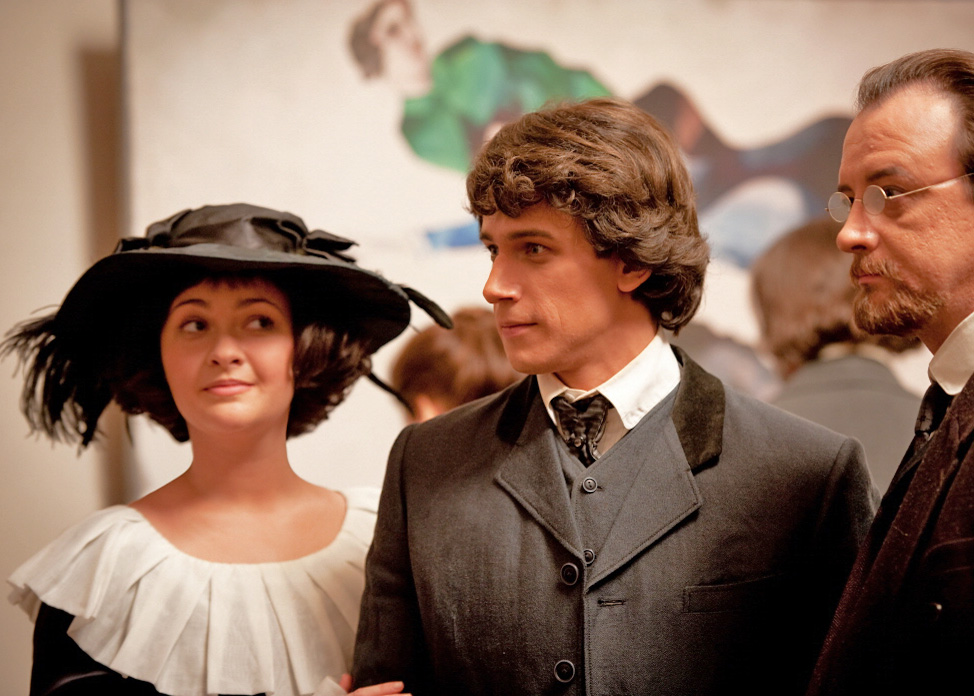 Bottom Photo: Marc and Bella attend an exhibit. Chagall’s famous painting Over the Town can clearly be seen mounted on the wall in the background.