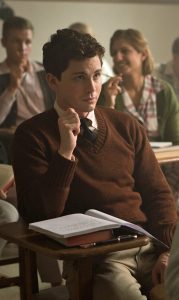 Based on the novel by Philip Roth, Indignation explores the complexities of a young man’s coming of age journey as he attempts to reconcile his place in the world. Despite glimpses of our protagonist challenging the establishment, the film falls short of delivering on its most basic promise, indignation. (EML: 3.5/5)

Newark, New Jersey.  1951. Boys are being pulled from their childhood homes for the jungles of Korea. It is a time of war, and the small Jewish community is clearly on edge. Unlike his classmates, “Marcus” (Logan Lerman) has avoided the draft by receiving a scholarship to a small, liberal arts college in Ohio. Though he isn’t going to war, Marcus’ father is incredibly anxious about his son leaving home, afraid that he will squander his opportunity by making even the smallest mistake. Marcus finds himself smothered by his father’s constant anxiety and cannot wait to leave home in favor of the freedom of a college campus.

Once at school, Marcus wishes to purely focus on his studies. He spurns the advances of the Jewish fraternity, refuses to get involved in social activities, and barely talks to anybody. Instead, Marcus goes to class, studies, and works at his campus job in the library.

Despite his intense focus, Marcus finds himself riveted by “Olivia Hutton” (Sarah Gadon). He borrows his roommate’s car and takes her out on  a date. She comes from money and divorce and everything about her has an odd sophistication that Marcus can’t quite relate to.

On their drive home, Olivia instructs Marcus to pull over in a cemetery where she proceeds to give him a blow job. Unfamiliar with this type of sexually forward behavior, the act sends Marcus into a spiral and he begins to avoid Olivia. Noticing this change in behavior, Olivia corners him in the library and explains her actions. She also explains that she previously attempted suicide and transferred to the school after spending time in a psych ward. Though this does not turn Marcus off to a relationship with her, Olivia insists that he should just forget her.

After a fight with his roommates, Marcus requests a new room which prompts him to have a meeting with “Dean Caudwell” (Tracy Letts). In this meeting, Caudwell confronts Marcus for his lack of social engagement and questions his Jewish identity. Marcus quickly defends himself, saying he is an atheist, although his religious affiliation and social interactions should be irrelevant to the university. The discussion grows more and more heated until Marcus fears he will be sick. He asks to leave but does not make it out of the door before vomiting all over the office. 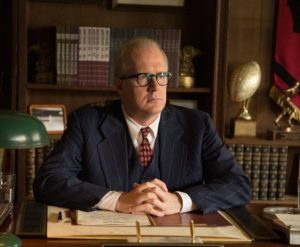 What follows is the slow demise of Marcus as he constrains himself to the perimeters being set up by the authority around him. Ending his relationship with Olivia for his mother, joining the Jewish fraternity to smooth over concerns of his social acclimation to the school, and allowing himself to become part of the establishment he’d once hated. This, of course, ultimately becomes his undoing.

While there is something to be said for Director James Schamus’ quiet exploration of a young man’s journey to self-discovery, there was one key aspect missing from this film – indignation. The title suggests a man rebelling against injustice, determined to be treated fairly in a system stacked against him. Yet, Schamus attempts to place all of those stakes in Olivia. She represents Marcus’ ability to work outside of the system, because she is not confined by conventional rules. Her brashness, her sexual promiscuity, her openness about her own mental health issues, put her inexplicably in contrast with the constrained world around her. She becomes an object for Marcus to feed his righteous anger through, and in her exit from his life, so too does Marcus find himself slipping into the chokeholds of the establishment and ultimately his demise.

Marcus himself has much to be angry about. Despite being an atheist, Marcus’ Jewish background leads the school to automatically house him amongst other Jews, with no regard for their different interests and lifestyles. When this living arrangement proves too difficult for Marcus to handle, his desire to find a new room is met with contempt by his Dean and his character, beliefs, and heritage are brought into question.

However, rather than allowing Marcus’ justified indignation about his treatment in a poorly veiled anti-Semitic system that essentially sequesters the Jewish students to live amongst their “own kind.” Rather than allowing Marcus to be outraged that his character is called into question because he rejects his own religious upbringing in favor of a logical, reasoned approach to morality. Rather than allowing Marcus’ anger towards being told his social life is not “up to standards” despite his brilliant grades. Rather than any of the reasons that Marcus should be indignant, the film chooses to personify this struggle in Olivia, turning what could be a harsh look into the bullying of the establishment into nothing more than a trite tragic love story.

In a time where there is again unrest at the role of the establishment in controlling the minutia of our day to day lives, Indignation misses its opportunity to add its voice, its parallels, to the conversation. And that, is where the film fails. 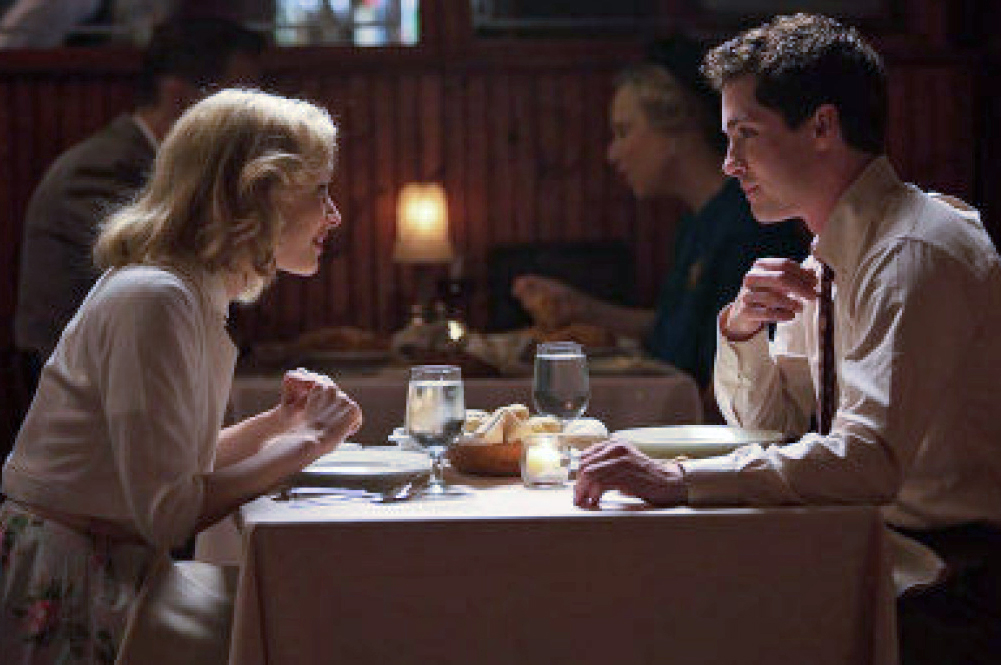 Top Photo: “Marcus” (Logan Lerman) puts his studies above all else.

Bottom Photo: “Marcus” (Logan Lerman) and “Olivia” (Sarah Gadon) on their first date at L’Escargot–the best restaurant in town–where Marcus resolutely eats escargot. Given that he is from a kosher home, this culinary rebellion sets the stage for all the “brave” acts yet to come.

SPOILER ALERT: I not only applaud Elly’s review, I think–if anything–she has been too kind. I left my screening of Indignation with, yes, indignation. I felt that the filmmaker had wasted his cast and crew, while I had wasted my time. The entire film is a cheat and I am enraged by the fact that it now has an 81% “Certified Fresh” rating on Rotten Tomatoes.

What every critic in the “Fresh” camp raves about, of course, is the extended face-off between “Marcus” (Logan Lerman) and “Dean Caudwell” (Tracy Letts). I have not read Philip Roth’s source novel, but I take the word of those who have, meaning I assume that what filmmaker James Schamus put on screen is very faithful to what Philip Roth put on the page.

I have had my problems with Roth over the years, well-documented in reviews of films like Goodbye, Columbus and Portnoy’s Complaint (which I did not like) and Empathy and The Human Stain (both of which I loved). In my experience with Philip Roth adaptations, the more “faithful” the film tries to be, the worse the outcome.

The scene in question is an intellectual showpiece: two alpha males battling for supremacy but using words rather than fists. I found it long, drawn out, and extremely tedious in the moment. Then, once the plot had cranked itself to the end of the final reel, I realized I had also been cheated.

Cheated? Here are two things that stick in my craw.

First, Marcus is ostensibly called into Dean Caudwell’s office to explain himself after he asks to be moved into a new room. This is absurd on the face of it, and totally preposterous once we know that Dean Caudwell knows all about Olivia’s emotional issues. Olivia’s father is a wealthy alumnus and Dean Caudwell admitted Olivia as a favor to him after she was expelled. I bet that those who read Indignation will discover that Dean Caudwell knows all about the budding relationship between Marcus and Olivia, and he has called Marcus into his office to get a feel for what problems he can expect from it down the road.

Second, this long protracted scene finally ends when Marcus pukes all over Dean Caudwell’s office. Midway through the conversation, Marcus begins to perspire and as the minutes tick by, his forehead becomes ever more damp. We are lead to believe that this is due to anxiety, but surprise! It turns out Marcus actually has appendicitis!!! Now I’m no doctor, but I doubt appendicitis comes out of nowhere with no prior pain or symptoms of any kind. Preposterous.

The appendicitis attack is merely a red herring serving two plot needs: Get Marcus out of Dean Caudwell’s office with his intellectual stature intact, and bring “Mama Messner” (Linda Emond) from New Jersey to Ohio to shove the final knife into the Marcus/Olivia relationship. Shameful screenwriting. Feh!

I could go on and on about the misogynist caricatures of yet another glorious Shiksah Goddess (Olivia Hutton) and yet another intrusive Jewish Mother (Esther Messner), but why bother? That’s just same old/same old from Philip Roth 🙁 (JLH: 3/5) 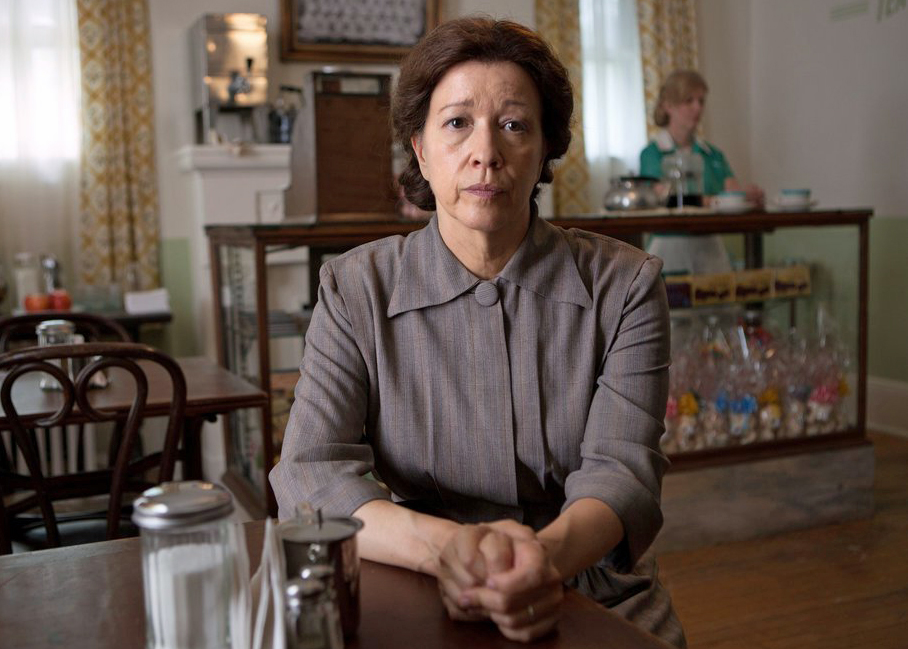