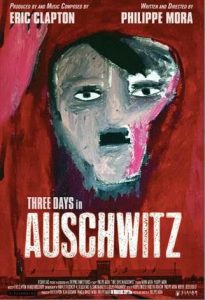 Now, less than a century since the Holocaust, already the memory has seemed to fade, dimming for those who only hear about it as part of a broader history lesson. In Three Days in Auschwitz, writer/director Philippe Mora attempts to bring the atrocities of the Holocaust, particularly the horrific murders that took place at Auschwitz-Birkenau, back to life, as a stark reminder that we must never allow the world to forget. (EML: 3/5)

A slow, somber acoustic guitar plays as a Joseph Goebbel quote scrolls across the screen. The impact is instantaneous, just the white text against the black screen and the weight of what will be explored is already felt. Using drawn artwork, historical photo and video footage, as well as modern footage of tourists visiting the now abandoned Auschwitz, writer/director Philippe Mora uses everything at his disposal to make the memory of what happened to those forced to live (and mostly die) at Auschwitz, as vivid as possible for his audience.

The documentary moves away from the actual visual representation of Auschwitz in favor of intimate interviews with Mora in his office and a restaurant. Mora starts to describe his personal relationship to the Holocaust and Auschwitz. As an artist, Mora’s journey to understand and make sense of the atrocities is focused primarily on his painting. He describes an image he painted of himself in conversation with Hitler, as well as his depiction of Hitler’s moment of decision to decimate the Jewish population of Europe. It is Mora’s artwork that becomes the focal point of the storytelling, using score and Mora’s painted images to try and give the audience the same mindset as the filmmaker.

Next Mora travels to his hometown of Melbourne, Australia, searching for answers. He interviews family members, survivors of the Holocaust, allowing them to share their stories, their memories, their experiences.

From Melbourne, Mora travels to Auschwitz where he provides facts on the horrors that took place. Mora follows a tour group, walking around the vast property and seeing the dilapidated and destroyed buildings that once took the lives of over a million. In many areas, the buildings are merely marked by ropes and ruins, providing only a glimpse of the stature and immensity that the place must once have been. 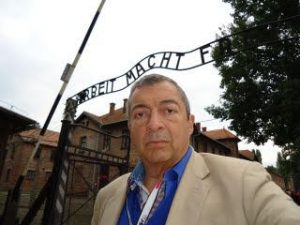 From Auschwitz, Mora goes to the Holocaust museum of London. Though he says he isn’t allowed to film inside, he still takes his camera with him as he tours the museum. Most striking to him, and most reassuring, is the presence of children, ensuring that another generation will keep the memory of the Holocaust alive and hopefully keep such an event from happening again.

Despite its best intentions, Three Days in Auschwitz fails to engage the audience as it intends. Firstly, Mora’s introspective approach to the filmmaking makes the audience feel like an intruder or an outsider, rather than a part of the storytelling. While Mora’s intense personal connection to his subject matter makes his passion all the more evident, it almost becomes selfish as he repeatedly discusses why he, as a filmmaker, wants to tell this story, rather than using the film purely to pay homage and respect to the victims of one of the world’s greatest crimes against humanity. Furthermore, Mora’s use of his own artwork serves only to enhance the vanity of the endeavour. In many ways, with the addition of the artwork, Mora’s film begins to feel more like a therapy session rather than an engaging film.

Secondly, the film overuses its score and attempts to use the musical accompaniment to try and elicit an emotional response, rather than doing so through visuals and storytelling. The reliance on the music makes the film feel very amateur and allows the audience’s attention to wander, making it difficult to remain engaged with the film.

Lastly, the filming style, while likely geared at creating closeness and intimacy with the interview subjects, instead makes the film feel amateur. Fish-eye lens shots, selfie handheld shots, and strange angles all contribute to a feeling of thrown togetherness that pushes the audience out of the story. This coupled with repeated use of scrolling quotes, create a sense of a school assignment or a travel diary rather than a theatrical film.

In the end, Mora says it best himself, Three Days in Auschwitz is less a film than it is “cinematic notes.” Often disjointed, failing to tell an overarching story, relying on gimmicks to provide an emotional response rather than storytelling, and using amateur filming tactics, the film feels more like a personal history report than a seasoned filmmaker’s retelling of the horrors of Auschwitz. 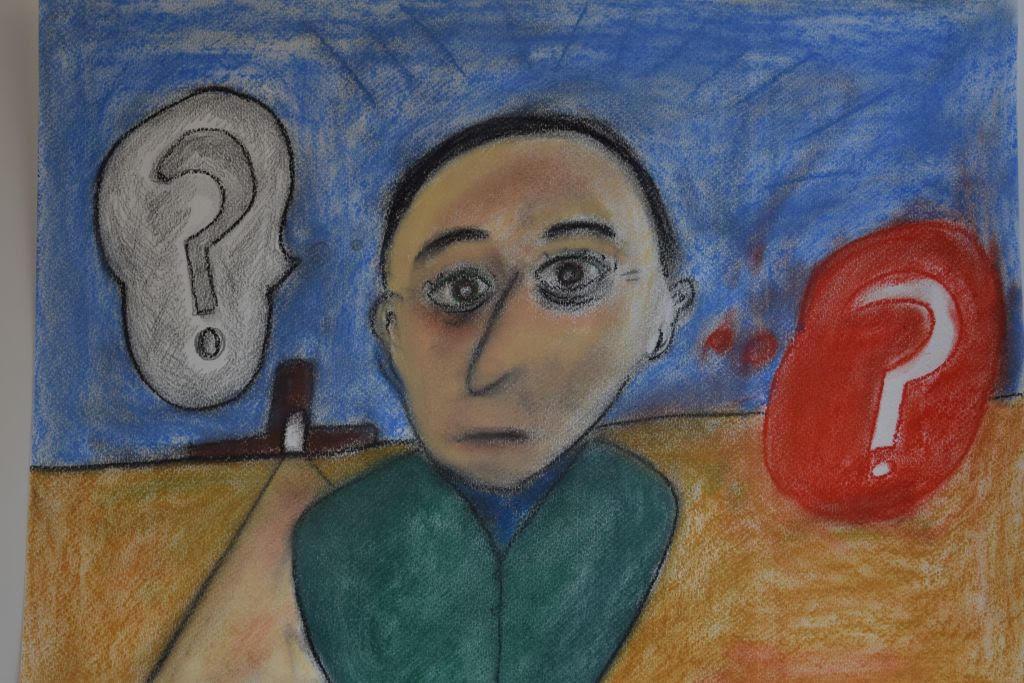 Top Photo: The poster for Philippe Mora’s Three Days in Auschwitz, featuring an original painting by Mora of Hitler’s face.

Middle Photo: Mora takes a selfie outside the infamous gate to Auschwitz.

Bottom Photo: A self-portrait painted by Mora expressing his emotional state at the outset of creating the film.
Photo Credits: Needle and Associates