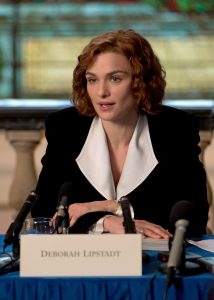 My favorite Yiddish Expression is “Man Plans; God Laughs.” In this instance, the amazing life of Deborah Esther Lipstadt reached its ironic culmination the week of the first nationally televised debate between Hillary Rodham Clinton and Donald J. Trump.

The debate was held on the evening of Monday September 26, so when Denial–the film about Lipstadt’s courtroom face-off with Holocaust denier David Irving–opened in theaters in Los Angeles and Manhattan on Friday September 30, it was at the edge of mind for everyone in the audience, and the parallels between life and art were unmistakable.

So who is Deborah Esther Lipstadt and how did she come to find herself in a courtroom in London in 2000?

I want to state outright that I understand that many people will vote Republican next month because they are sincere Conservatives and hold positions (e.g., Pro Life, Fiscal Restraint, etc) that make the potential election of Hillary Rodham Clinton anathema. My review is not Pro-Hillary; my review is Pro-Truth.

As I said in my review, I had the privilege of attending long Q&A sessions after the two early screenings I attended, so three times, I heard Lipstadt say this: “The Holocaust happened. Slavery happened. The Black Death happened. The earth is round. The polar icecaps are melting. And Elvis is no longer alive.”

Need I say that much time was spent in these Q&A’s discussing Donald J. Trump, his connections with the Alt-Right, and the dynamics of his candidacy. Here is how Wikipedia begins its description of Trump’s involvement in the Birther Movement: “In March 2011, during an interview on Good Morning America, Donald Trump said he was seriously considering running for president, that he was a “little” skeptical of Obama’s citizenship, and that someone who shares this view shouldn’t be so quickly dismissed as an “idiot”… Trump added, ‘Growing up no one knew him,’ a claim ranked Pants-on-Fire by Politifact.” 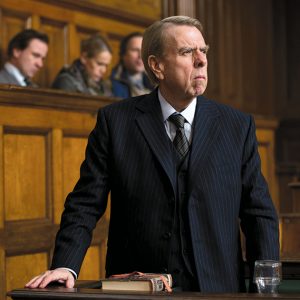 But the most interesting question raised in the first Q&A was: Deborah, Why you???

One of her Emory friends actually asks the Deborah character this very question at the beginning of Act Two. In the film, Deborah says: “Because I am Jewish and I am a woman.” But in the Q&A, she gave three reasons:

The first reason makes total sense. Irving waited until Denying the Holocaust: The Growing Assault on Truth and Memory was published in the UK precisely in order to have the plaintiff’s advantage in a British court. The film even shows how he set up her in front of American students so he would “have the goods on her” when he was ready to make his move.

The third reason makes total sense too. Lipstadt actually says fairly little about Irving in Denying the Holocaust. Others–non-American, non-Jewish–had already said more. But he obviously wanted his defendant to be Jewish.

But what about the second reason? Why did he want her to be a woman? Luckily I was able to ask this very question in the second Q&A, and Lipstadt’s answer was not only long but totally fascinating. In a nutshell, she said something like this: “These things in the ‘Basket of Deplorables’ usually go together. Someone in the Alt-Right is likely to be a racist and an anti-Semite and a misogynist. In my case, he thought this couldn’t really be coming from me because I was ‘just a woman.’ In other words, he thought I was just ‘a front.’ Bring me down, and he would bring down the whole Jewish Conspiracy.”

Deborah: I hope I got this right. If not, I hope someone will correct me. All I can say is: This made perfect sense to me!!!

The other fascinating topic was, of course, money. She talked about how she raised the money for legal expenses, and she stated emphatically that everything that remained went to Jewish charities. She talked about Abraham and said “Not One Shoelace.” Here is the exact section from my Etz Hayim translation:

The invaders seized all the wealth of Sodom and Gomorrah, and all their provisions, and went their way. They also took Lot, the son of Abram’s brother, and his possessions, and departed; for he had settled in Sodom. (Page 79, Genesis 14:11-12)

When Abram learned that his kinsman [Lot] had been taken captive, he mustered his retainers… and went in pursuit… At night, he and his servants deployed against them and defeated them… He brought back all the possessions; he also brought back his kinsman Lot and his possessions, and the women, and the rest of the people… (Page 80, Genesis 14:14)

Then the king of Sodom said to Abram, “Give me the persons, and take the possessions for yourself.” But Abram said to the King of Sodom, “I swear to the LORD, God Most High, Creator of heaven and earth: I will not take so much as a thread or a sandal strap of what is yours; you shall not say, ‘It is I who made Abram rich.’” (Page 81 14:21—14:23)

YOWZA! BRAVA, DEBORAH. YOU ARE, INDEED, A LEADER OF YOUR PEOPLE 🙂 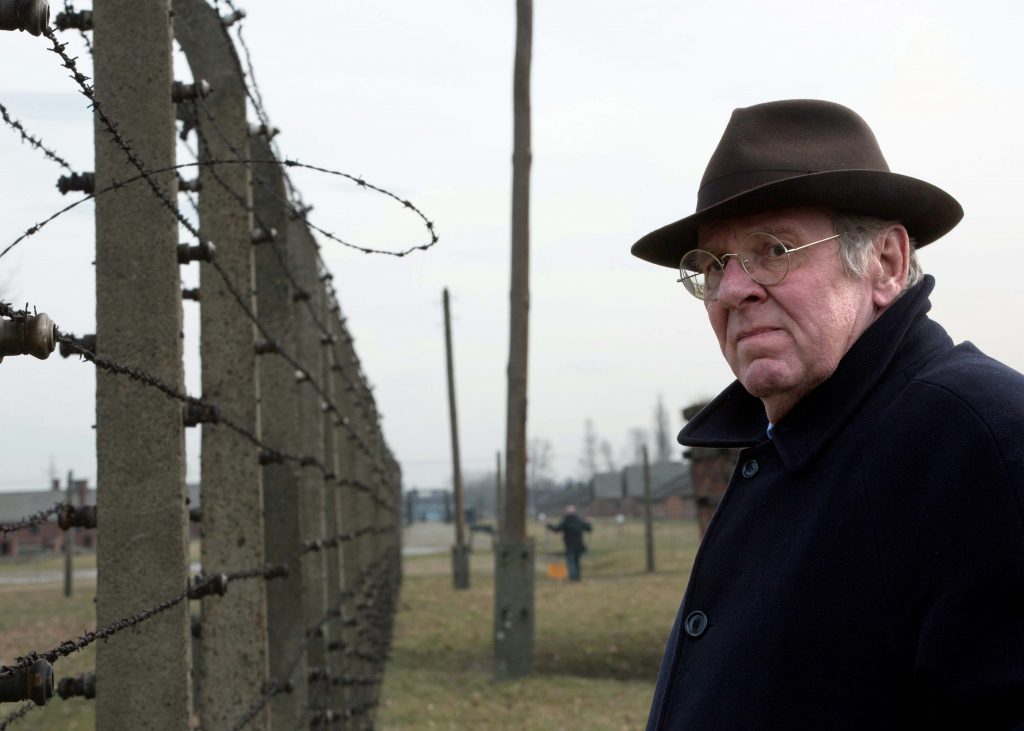