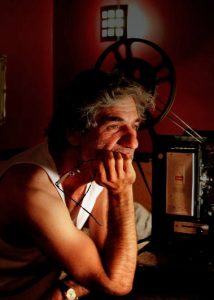 Dani Menkin’s spin on the traditional road trip movie, Is That You? delivers a poignant bittersweet quality as a man searches far and wide for his long lost sweetheart. In the vein of An Affair to Remember, Menkin’s film captures vulnerability and hope in a quiet way that makes the audience reflect on their own journey. (EML: 4.5/5)

As part of his severance package, “Ronnie” (Alon Aboutboul) is given a ticket to travel to the United States and decides to go, hoping to find a long lost lover named Rachel. His brother, “Jacob” (Rani Blair) picks him up from the airport and the two discuss Jacob’s son “Michael” (Patrick Michael Kelly), who recently returned from his Birthright trip with a desire to serve in the IDF, mostly in pursuit of attractive Israeli women. There is some tension as the two discuss Jacob’s failure to return to Israel for their mother’s funeral, but it is quickly dispelled.

At Jacob’s house, Ronnie, Jacob and Michael attempt to track down Rachel via the Internet. They find a woman on Facebook who seems to be a match, although her profile has no picture for verification. They send the profile a message asking “Is that you?” in the hopes of discovering for sure.

Later that night, Ronnie and Jacob watch old home movies of their younger days. Jacob remarks on his younger brother’s obsession with Rachel, who is featured in the video, and how all other women were put into comparison with her. Ronnie reveals that Michael found an address for Rachel and that he is going to go and try to see her. He explains that they had made a pact, that no matter what happened in their lives, they would be together on her 60th birthday. With her 60th birthday in two days, Ronnie is determined to make good on their agreement. Though Jacob thinks his brother has seen one too many romantic movies, he gives his brother a car and sends him on his way.

Ronnie arrives at the address to learn that Rachel moved away with her husband over a year ago. The current tenant offers him a forwarding address which Ronnie takes. However, on his way, Ronnie’s car breaks down. 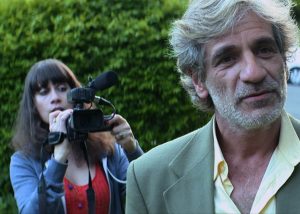 Pulled over and attempting to fix his car, Ronnie meets “Myla” (Naruna Kaplan de Macedo), a documentary filmmaker working on a project called “The Road Not Taken” about regrets. She trades Ronnie car mechanic services for him being an interview subject in her film. When he tells her about his mission to find Rachel, she decides to help him. Together, the two venture on a heartbreaking and wacky journey to find Rachel and reunite Ronnie with his long lost sweetheart.

A twist on the classic road trip movie, Is That You? delivers a sweet sadness as our protagonists journey far and wide in search of fulfilling a forty year old promise. Your standard odd couple, Ronnie and Myla each bring a unique quality to the concept of regret and taking chances. Both at very different life stages, their age is only one factor that seems to separate these two and yet, what sucks you into their relationship is not their differences but rather, their similarities. Both are dreamers, though arguably different types, and both truly believe in the journey.

There is something beautifully tragic about Ronnie’s vulnerability as he knocks on door after door, asking “Is that you” of various Rachels. This, coupled with the message of Myla’s documentary interviews, makes for a touching exploration of humanity. The filmmaking style of switching between Myla’s interviews and “reality” creates a unique sense of self and character as the film continues. Almost reminiscent of When Harry Met Sally, Menkin’s film plays with the idea of personal interviews intertwined with a fictional narrative, allowing the two to build off of one another.

Overall Is That You? points to the universality of regret and the way that regret plays into our daily lives. Both in the documentary film and in Ronnie’s search for Rachel, the idea of missed opportunities and lives not lived is at the forefront. Even those who seem happy, even those who are happy, still yearn for something they left behind or something they never tried. The interplay between taking risks and lacking regrets is the elevating factor of this quiet film. While there are parts of the film that fall into the indie cliches, particularly in the building of Ronnie and Myla’s relationship, the film attempts, and primarily succeeds, to address classic narratives in a new way.

Bottom Photo: After a officer pulls them over, Ronnie and the officer agree to hold up a sign for Myla’s film “The Road Not Taken.”

I am so glad Elly liked this movie! She is a young person (near the start of her journey). I am a much older person (heading towards the end of mine). The fact that both of us liked this film so much speaks volumes about Dani Menkin’s skill as a filmmaker. (JLH: 4.5/5)

Note that I saw Is That You? last year on screener because it was part of the 2015 Chicago Festival of Israeli Cinema line-up. Here are some of the things I said about it in my CFIC ’15 feature for Chicago’s JUF News:

BEST NEW STARS Naruna Kaplan De Macedo stars as “Myla” in Is That You? She looks a bit like Zooey Deschanel, thus priming the audience to expect another “Manic Pixie Dream Girl” character. But to their credit, screenwriters Dani Menkin and Eshkol Nevo have given “Myla” her own poignant and complex arc, and Naruna Kaplan De Macedo totally holds her own in scenes with Alon Aboutboul (who I named Best Actor last year for his starring role in A Place in Heaven).

BEST SCREENPLAY This year-for the first time-I am also adding a Best Screenplay category in honor of Is That You? Ostensibly this is a road movie with many genre tropes, but the dialogue is so beautifully written that sometimes I found myself gasping as I watched. Although his name is not in my press materials and it is not on IMDb, I detected the name of award-winning Israeli novelist Eshkol Nevo as the credits rolled, and then it all made sense. Kudos to director Dani Menkin for finding collaborators who could help him write the perfect words for his perfect cast. Then add a shout-out to composer Issar Shulman for his lovely musical score (which is augmented by songs chosen personally by Menkin and melded together by Philip Gozlan’s sound design).

BEST ACTOR This was the toughest category to call this year, but in the end, after seesawing back and forth, my choice is Ze’ev Revach for his portrayal of “Yehezkel” in The Farewell Party… The runner-up in this category-of course-is Alon Aboutboul, who stars as “Roni” in Is That You?

TZIVI’s TOP PICKS Is That You? is HIGHLY RECOMMENDED 🙂