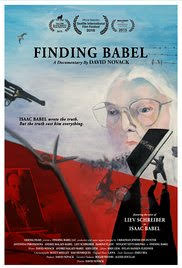 Triggered by the death of his grandmother, Andre Malaev Babel follows the trail left behind in the unfinished writings and diary notes of his late grandfather, the acclaimed Soviet writer, Isaac Babel, who was executed by the government for supposedly criticizing the Communist movement. (EML: 3.5/5)

Liev Schreiber’s voice brings life to the words of Isaac Babel’s works, both fictional and autobiographical. Babel’s work betrays a conflicting identity as both a Jew and a Soviet. In his novels, Babel’s alter ego is a Jew who chooses to join with the Cossacks, those who are mercilessly slaughtering Jewish communities through pogroms. This character is simultaneously included in the Cossacks and yet excluded, not fully convincing or hiding his Jewishness. These feelings of identifying as both a Jew and a Soviet are echoed in Babel’s diary entries, exploring the depth of the schism felt by the Jews of Eastern Europe in the years between World War I and World War II. It is this dual identity that causes Babel to be challenging to those who wish for uniformity and commonality. For Babel, his works were not just creating stories, rather they were his way of bearing witness to history. The history of a time when Europe was at a breaking point that would lead to the Holocaust. 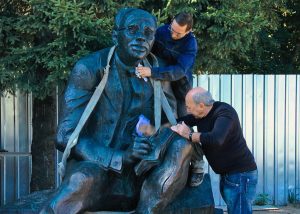 Throughout the film, Andre meets with historians and laymen alike to discuss his grandfather’s works and try to understand the historical context that surrounded his grandfather’s writings. While in Odessa, he is able to be part of a celebration that honors his grandfather and visits one of the homes that Babel lived and wrote in. During his trip to France, Andre works with a cast of actors to rehearse “Maria,” a play by Isaac Babel, and presses them to explore the themes surrounding their individual roles and characters. By the end, Andre travels to the location of his grandfather’s imprisonment and eventual execution, only to be turned away by the guard and prevented from paying final homage to the man whose life he just journeyed through.

Throughout the film, Finding Babel struggles to captivate the audience by failing to convey a clear, overarching storyline or a compelling message. The interspersed recitations of Babel’s work over dramatic animations and montages of each passage feel out of place and distract from Andre’s journey to learn the history of Babel’s experience. In fact, more than anything, the recitations compel the audience to wish solely to read Babel’s actual words rather than experience them through the medium of film.

Finding Babel attempts to add depth of meaning to Isaac Babel’s storytelling by exploring the realities of both the historical locations and their modern context, however it often fails to engage the audience in a meaningful way. If the purpose of the film is to inspire a new generation to read the works of Isaac Babel, the film could have focused more on the literary exploration of the works. If the film intended to present a comprehensive Jewish history during Babel’s time, the film could have focused more on the historical relevance of each location and the role that Babel’s fictional writing played in addressing the conflicts and issues of the time. As it stands, however, Finding Babel falls short of sending the audience a clear message on its own purpose, and therefore misses the mark in creating any sort of impact. 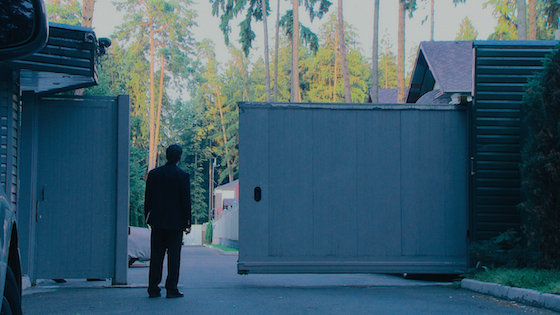 Middle Photo: Andre Babel stands outside of the prison where his grandfather was arrested (and later executed) barred from entering.

Bottom Photo: A statue of Isaac Babel is cleaned and sanded in preparation for a celebration of Babel’s life in the Ukraine.