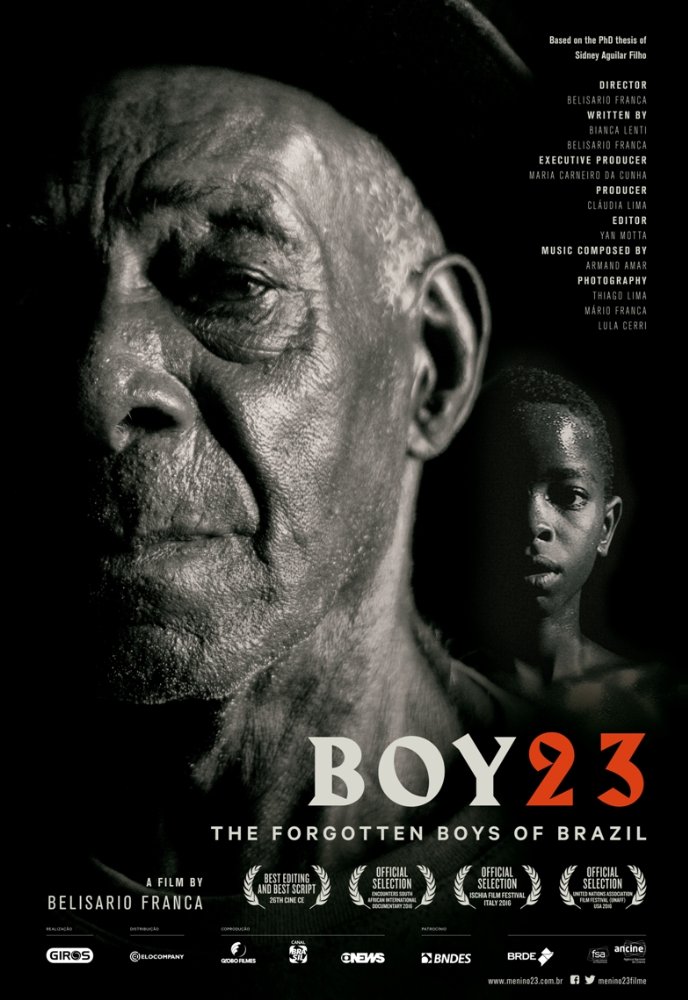 An untold story of WW2, Belisario Franca’s Boy 23 tells the forgotten history of Brazil’s support of Nazism and the horrifying account of one boy’s experience with the racist experiments performed by Nazi sympathizers there. (EML: 3.5/5)

The film begins with a teacher recounting a student’s admission that swastika engraved bricks had been found on a family property. Next, a farmer, recounts his own discovery of similarly engraved bricks and his curiosity to pursue how the bricks had come to be on the property. This leads him to historian, Sidney Aguilar Filho, who tries to piece together the tragic history behind Brazil’s contribution to Nazism.

In his research, Filho discovers a disturbing trend that ties these Nazi branded farms with the transfer of young black boys from surrounding Catholic orphanages. Focusing on this connection, Filho digs deeper into the history of the plantation owners and families that owned the properties discovered to be connected to Nazism. This research leads him to the Rocha Miranda family, an affluent and political family who owned much of the Brazilian countryside at the time.

Using film footage and still photography of the time, Filho explores the society that led to an acceptance and even appreciation of Nazi fascist ideology. Filho discusses Brazil’s sordid past with racism, including its late abolishment of slavery. He acknowledges that the 1920s and 30s were among the most racist in Brazilian history, and that newly freed slaves were still ostracized with no clear social integration plan for this large population of disenfranchised blacks. It is in this climate that eugenics gains popularity as a viable scientific concept.

Through his research, Filho discovers a survivor, Mr. Aloisio Silva, who was transferred from the Romao Duarte Orphanage in Rio De Janeiro to an outlying rural community where he was subjected to eugenic experimentation. With Filho, Mr. Aloisio revisits the orphanage. Though beautiful in architecture, the place clearly holds a darkness that is visible on Mr. Aloisio’s face. As he wanders through the empty halls and rooms, historical footage paints a picture of what the orphanage must have been like during Mr. Aloisio’s stay. Mr. Aloisio recalls the day that the Rocha Miranda family arrived to choose the boys. He remembers them throwing handfuls of candy at them, watching them clamor for the sweets, not knowing what price they would pay. They were separated into groups, like animals, as the family took their picks.

What happens next is a harrowing exploration of humanity’s darkness. Isolated and disenfranchised, the boys were trapped in the reality of their experience. Kept as slaves, Mr. Aloisio and the other boys were subjected to harsh working conditions and kept on a strict schedule. As Mr. Aloisio recounts his tale, he informs Filho’s continued research into the truth of Brazil’s relationship to Nazism and eugenics.

Filho’s research leads him to another survivor,  Mr. Argemiro Dos Santos. Filho reflects on how both men seem to look back on their tragic childhood differently. While Mr. Argemiro jokes about the hardships, and prides himself on his ability to persevere and overcome, Mr. Aloisio harbors a deep rooted anger and thirst for vengeance.

Quiet and slow, Franca abandons a traditional talking heads style documentary in favor of a more artistic rendering, utilizing scored black & white recreations, historical footage, and still photography to add drama to the personal accounts. However, despite its attempts to add a narrative element, Boy 23 falls into the classic trap of feeling more like a history lecture than a cinematic venture. While Mr. Aloisio’s personal story is tragic, and his pain palpable in his voice and mannerisms, the film itself is a crawling exploration of Brazil’s racial history.

Overall, Franca’s Boy 23 spends too much time on the history of the society, rather than focusing on Mr. Aloisio’s story and his horrifying fate. While the history is informative and important, the pacing of the documentary makes it difficult for the audience to emotionally invest in Mr. Aloisio’s suffering. The constant cuts of artistic shots, aimed at adding drama to the narrative, result mainly in slowing down the storytelling and pulling the audience out of the story itself. While Boy 23 serves a profound purpose in bringing to light this forgotten story of WW2, it would have been more impactful if Franca had allowed Mr. Aloisio’s story to be at the forefront of the narrative throughout to favor an emotional connection over an educational one. Bottom Photo: A still of Mr. Aloisio during an emotional interview.