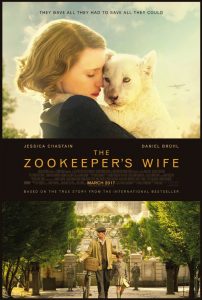 Niki Caro’s The Zookeeper’s Wife recounts the efforts of Antonina Żabiński and her husband, Jan, who risked their lives during World War II to harbor Jewish refugees in the basement of their zoo during the Nazi occupation of Warsaw. (EML: 3.5/5)

Warsaw, Poland, pre-invasion. Happy. Simple. Unafraid. “Antonina Żabiński” (Jessica Chastain) rides her bike through the family’s zoo, clearly at ease amongst the animals. She and her husband, “Jan” (Johan Heldenbergh), share a loving relationship, often working side by side within the zoo as equals. At a dinner party, Antonina faces some scrutiny for her behavior, unseemly for a woman of the time, and a visiting German zookeeper “Lutz Heck” (Daniel Brühl) comes to her aid. Even prior to Germany’s invasion of Poland, there is clear tension between Heck and his Polish peers.

Germany attacks. Bombs fall on the zoo, killing many of the animals instantly, releasing others from their now mangled cages. Antonina and her son run to hide in the basement, a storage space for some of the animals. When they emerge, they find their zoo destroyed, their home damaged, and slowly, they attempt to clean up.

Heck returns, this time in Nazi uniform, explaining that the Żabiński’s zoo will be used as an armament for the Nazi troops and that the animals will be killed off, for the war effort. He also plans to use the zoo’s cages for a genetic experiment he’s working on, hoping to bring back an animal from extinction. In a seemingly altruistic gesture, Heck offers to take some of the more valuable zoo animals to his zoo in Berlin, promising to return them to the Zabinskis after the war. Antonina agrees to his request without Jan present, unaware that she should not be trusting Heck or his empty promises.

For the Żabińskis, the changing world is a loss of their beautiful zoo, their livelihood. But they soon learn, for others, the Nazi invasion means so much more. When their Jewish friends come to visit, explaining the deportations and the ghettoization of Jews, the Żabińskis are quick to do what they can to assist their friends. They even agree to hide their friend “Magda” (Efrat Dor) after her husband is taken, understanding that, in doing so, they are taking a huge risk. For Antonina, this risk is enough, but Jan, who is out in the city of Warsaw, witnessing the monstrosities being done to the Jews, convinces his wife that they must do more.

Under the guise of running a pig farm to provide food for Nazi troops, Jan and Antonina become a stopping place for Jews escaping Poland. Sneaking Jews out of the ghetto and hiding them in the basement crawl spaces of the zoo, the Żabińskis attempt to provide some normalcy for their Jewish guests, including dinner parties where everyone can come out of hiding after the Nazi guards have left for the night.

Perhaps one of the most poignant moments of the film comes as the Warsaw ghetto is being burned to the ground, intercut with the Żabińskis and their Jewish refugees celebrating a Passover seder. As the familiar sounds of the Ma Nishtana carry over the destruction of the ghetto, the film provides a brief glimpse into the tragic loss of Jewish culture and community, a sentiment that is mostly overshadowed in a film that focuses on Antonina. 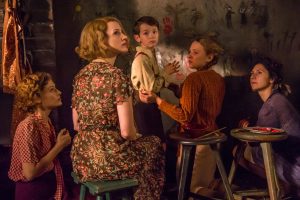 Though there are many ways in which the The Zookeeper’s Wife succeeds, it does add to a problematic and pervasive theme of Holocaust movies that focus on gentile morality rather than Jewish suffering. While there is no doubt that the Righteous Among the Nations such as Antonina Żabiński and her husband should be honored and remembered, the manner in which these narratives are told rewrite a sordid history by glossing over the inhumanity and focusing on gentile mercy rather than Jewish subjugation. For every one Antonina and Jan, there were a hundred just like them who were responsible for the degradation, deportation and dehumanization of thousands of Jews. For every one Jew saved by a Righteous Among the Nations, there were another million who were lost because they were seen as other, as lesser.

In The Zookeeper’s Wife the Jewish characters stand silent, resigned to their fate, idolizing a woman who is more than they can be, who, because she belongs, has the choice to be “other” where they did not, has the choice to stand up against the oppression as they could not. For Antonina and Jan and those like them, the Holocaust was an opportunity to make a choice but for the Jewish victims, this was not the case.  While it is important to tell the stories of those who chose to confront  evil, rather than cave to it, it is equally important to ensure that Jewish characters do not become props in the history of the Holocaust, merely serving to provide the context for a gentile moral triumph.

For instance, when two of the women harbored and disguised by Antonina are murdered on the streets by Nazi soldiers, discovered for being Jewish, the focus is not on the loss of Jewish life but rather Antonina’s reaction to it. She turns to her husband, sobbing, holding the pin given to her by one of the women, and inquires if it was the hair color that she gave her that allowed the Nazi’s to recognize the woman as a Jew. In moments like this, the film reveals a hidden selfishness to a character whose acts, in reality, were likely more selfless. Antonina’s role within the story should be one more of bearing witness, allowing the destruction of a people to be viewable through her perspective, and yet, the film instead, allows the Jews in her care to be a prop for her goodness.

Overall, The Zookeeper’s Wife is one of those Holocaust movies that will be lost in the canon of what some feel is an overdone genre. Outside of a few moments, the film fails to achieve true impact, likely because its focus often strays away from the Jewish tragedy in favor of Antonina’s personal struggles with Heck. While this film is not alone in using the Holocaust more as a backdrop, in many ways, the film’s treatment and use of its Jewish characters is more problematic than many of its counterparts, leaving the Jewish audience with a feeling of outsiderness, even as pieces of their own history unfold before them. Though we should be grateful to the film for sharing the names of those who saved hundreds, at its core The Zookeeper’s Wife fails to go beyond the narrative of how the darkest of times can bring out the best in people if, of course, those people are “white.” 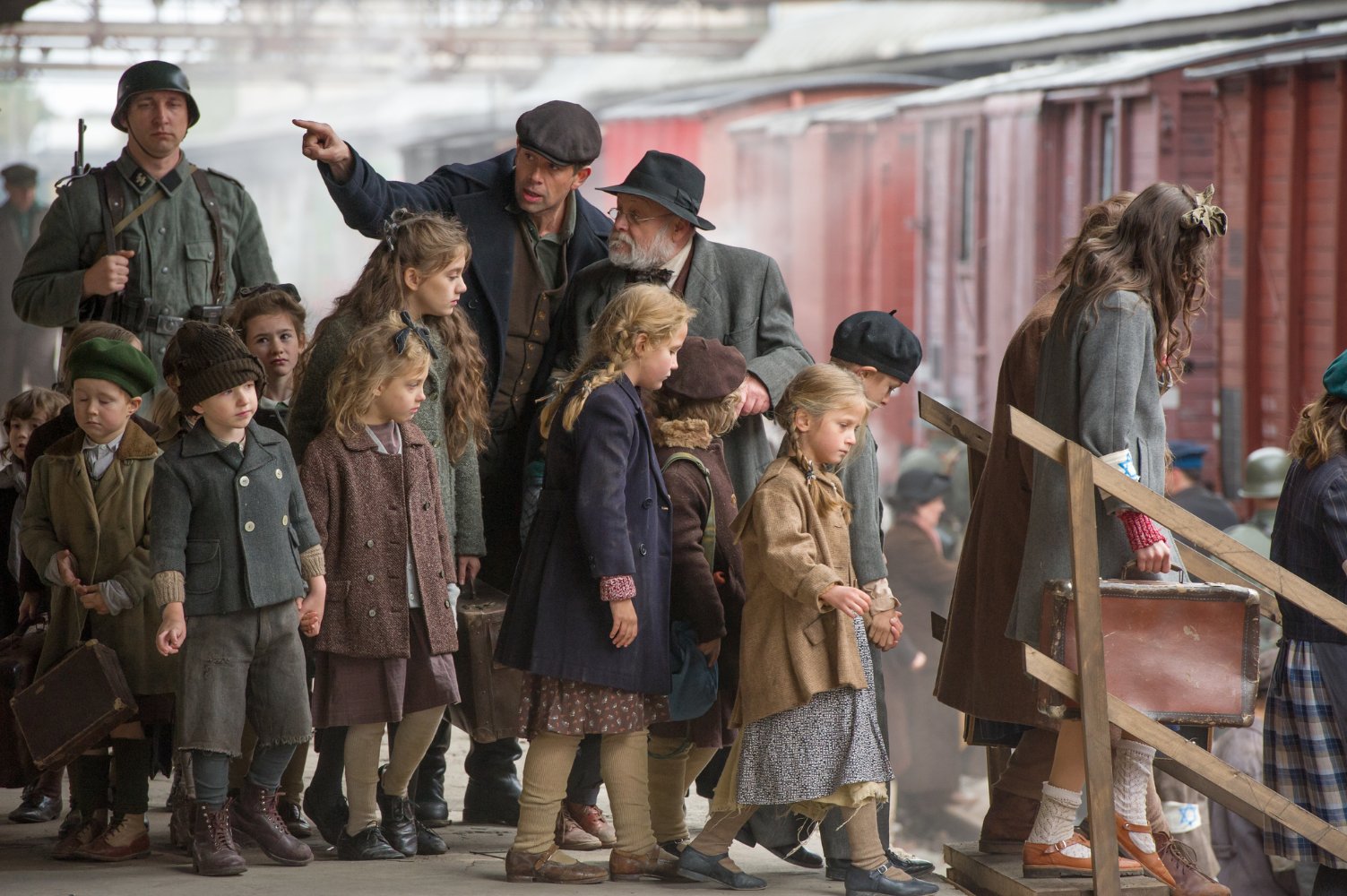 Top Photo: A poster for The Zookeeper’s Wife and another indication of the focus of the film not including the Jews. The poster has no reference to any of the Jewish characters or even the Holocaust itself, instead featuring “Antonina” (Jessica Chastain) cuddling a lion cub as if her loving attitude toward the animals provides insight into why she would take in the Jews.

Middle Photo: Antonina, her son, and some of the Jews hiding in her basement, decorate the  walls with Jewish symbols and other art, proof that they were there.

Bottom Photo: Jan attempts to convince a Jewish schoolteacher to come with him as the ghetto is evacuated and the occupants sent to the concentration camps. The teacher, however, refuses to leave his students and makes Jan promise to not act afraid so that the children don’t know that they are on their way to be killed.