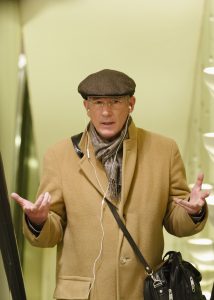 On Account of a Hat. In one of Sholem Aleichem’s best–loved stories, a wheeler dealer is forever “negotiating transactions” until “one day God takes pity on him, and for the first time in his career—are you listening?—he actually works out a deal.” But on account of a hat, exhilaration turns into farce and when he finally gets home, the people “point him out in the streets and hold their sides, laughing.”

Has Joseph Cedar, the Israeli-American director of Norman: The Moderate Rise and Tragic Fall of a New York Fixer, ever read “On Account of a Hat”? As Tevye famously said: “I’ll tell you—I don’t know!” But since I do know that Joseph Cedar planted a snippet from Fiddler on the Roof in his last film Footnote, I am placing my chips on yes.

Norman Oppenheimer, the eponymous hero of Cedar’s new film, also negotiates “transactions,” however, in Norman’s case, God’s instrument is not a hat but a pair of shoes. Late one night, on a train from Washington, DC to Manhattan, Norman describes these shoes as “the most expensive shoes in all of New York,” and, for the first time in his career, someone—a woman named Alex—is actually listening. Maybe if Norman had spent more time reading Sholem Aleichem stories, he would have known to keep his mouth shut on a train… But where better for Cedar (who also wrote the Norman screenplay) to sprinkle the seeds of Norman’s “tragic fall” than on a train from Union Station to Penn Station?

These shoes are not Norman’s shoes; he buys them as a gift for a man named Micha Eshel who has come to New York to speak at a conference. Eshel is one of three deputies to a minister in the cabinet of Israel’s (unnamed) Prime Minister, so his presentation is sparsely attended, and when it is over, he leaves the hotel and begins wandering the streets of Midtown Manhattan tourist-style. Eshel thinks he is alone. He has no idea that Norman is shadowing him, waiting for just the right moment to pounce.

This is Norman’s modus operandi, and it rarely works, but Eshel is at a low point in his life and he simply does not have sufficient energy to resist. The apparently unselfish kindness of an American man—obviously a Jewish-American man—moves him, so he allows Norman to purchase the shoes, almost as a favor to him.

Returning to his hotel, Eshel takes a call from his handler Duby, and Duby is immediately skeptical. Eshel submits, goes to dinner alone in the hotel restaurant (It must be in the hotel, Duby reminds him, because the gas company is paying for his trip!), eats oysters (treyf!), and gets drunk. Back in his room, Eshel pulls Norman’s card from the pocket of his jacket and calls. And when Norman answers, Eshel whispers to him in a moment of male bonding so heart-rending that the memory of it still send chills up my spine.

The big wheel in the amusement park? How do you say? Galgal anak?

Yes, yes, the Ferris Wheel. Sometimes you’re up and sometimes you’re down. I just wanted to say I have that taste, you know? Being on top of everything? Once you’ve tasted it, you can’t settle for anything else. Do you understand what I am saying?

The curtain falls on act one, and when act two begins “three years and many small favors later,” Eshel and Norman are both on the biggest Ferris Wheel of all, the Ferris Wheel in Washington, DC. And now I will say no more about the plot; I will talk only about the execution.

Everything about Norman is first rate. The casting is superb, beginning with Richard Gere as “Norman Oppenheimer” and Lior Ashkenazi as “Micha Eshel.” On the Israeli poster for Norman, Gere and Ashkenazi are back-to-back, emphasizing that they are equal partners in this story. On the other hand, the American poster—which only shows Richard Gere—makes the pragmatic assumption that many Americans have no idea who Lior Ashkenazi is.

To readers who fall into this category, let me just say that Lior Ashkenazi is as much a heartthrob in Israel as Richard Gere is here. Do Americans know that Lior Ashkenazi was the star of Late Marriage and Walk on Water? Do Israelis know what Richard Gere did after Pretty Woman, let alone before? No matter. Cedar knows that these two men actually do share intimate knowledge of how it feels to be at the top of the wheel, and they also understand that they have both passed its peak. Older now, they are still in the game, but more as character actors than objects of desire. How perceptive of Cedar to cast such a potent pair in a bromance of such depth and poignance.

The huge cast also contains many well-known actors playing Jewish men, and part of the joke is that most of them are as goyishe as Richard Gere is. Josh Charles as “Arthur Taub,” Dan Stevens as “Bill Kavish,” Michael Sheen as “Philip Cohen,” Steve Buscemi as “Rabbi Blumenthal,” are any of them Jewish? Josh Charles (born Joshua Aaron Charles) has a Jewish father and a mother of German/English/Scottish ancestry, so you decide. The others? Definitely not.

Only Harris Yulin as “Jo Wilf”—the “ocean liner” of movers and shakers—has a career based, to some extent, on his Ashkenazi Jewish background. But what about Hank Azaria you ask? Another joke. Azaria gives “Srul Katz” a risibly fake “Yiddish accent” which is surely intentional since this master of voices actually grew up in a Ladino-speaking family.

Meanwhile, the actors who play the Israelis in Eshel’s world (Yehuda Almagor as “Duby,” Neta Riskin as Eshel’s chief aide “Hanna,” and Tali Sharon as Eshel’s wife “Naomi”) are all stars there, even though they are probably unknown here. 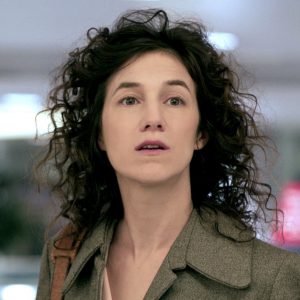 And Alex? Charlotte Gainsbourg plays “Alex Green” as the compleat cosmopolitan. When Norman prods, Alex tells him—in a perfect British accent—that she is from Geneva. Gainsbourg (who, like Josh Charles, has a Jewish father and a non-Jewish mother) showed her gravitas early when Franco Zeffirelli cast her as “Jane Eyre” in the mid-90s, and she has carried it with her ever since through a huge number of films (many in French). As the Paris-born daughter of Serge Gainsbourg, she brings personal knowledge of Ferris Wheels to her portrayal of Alex too. When Norman asks Alex what she needs, Alex replies: “I need the satisfaction of knowing I am doing good in the world. Can you give me that, Norman?”

For once, Norman is stumped, but Cedar is not. A master of his craft, as best exemplified in two dazzling scenes in which time literally stops (first at the top, and then at the bottom), Cedar receives expert support from everyone on his team. Cinematographer Yaron Scarf (who won an Ophir Award for Footnote) is back, but for Norman, Cedar also added many newcomers to his crew including music director Hal Wilner (who brings both cantorial solos and klezmer riffs to composer Jun Miyake’s score), costume designer Michelle Matland, and casting director Laura Rosenthal. Working with a large team of American and Israeli producers, Cedar has secured his place in world cinema.

Who is “a Jew” in Norman? What is “a Jew” in this crazy world of ours? This is the conundrum in which Cedar ensnares us, because answers to questions like these are no longer as clear as they were once thought to be. And that brings us to God. Where is God in this film? God is certainly the force that powers the wheel; God is “the ghost in the machine.” But the God of Norman is definitely a Jewish God. As the Yiddish proverb says: “Man Plans; God Laughs.” In Norman, God laughs through tears.

Norman opens today (April 21) at the Landmark Century Center in Lincoln Park and the Landmark Renaissance Place in Highland Park. For times and tickets, visit the Landmark Theatres Chicago website.

Norman is Joseph Cedar’s fifth film, and yes, I have seen them all. For my reflections on Norman in the context of Joseph Cedar’s career, see my blog post (which also contains additional photos). 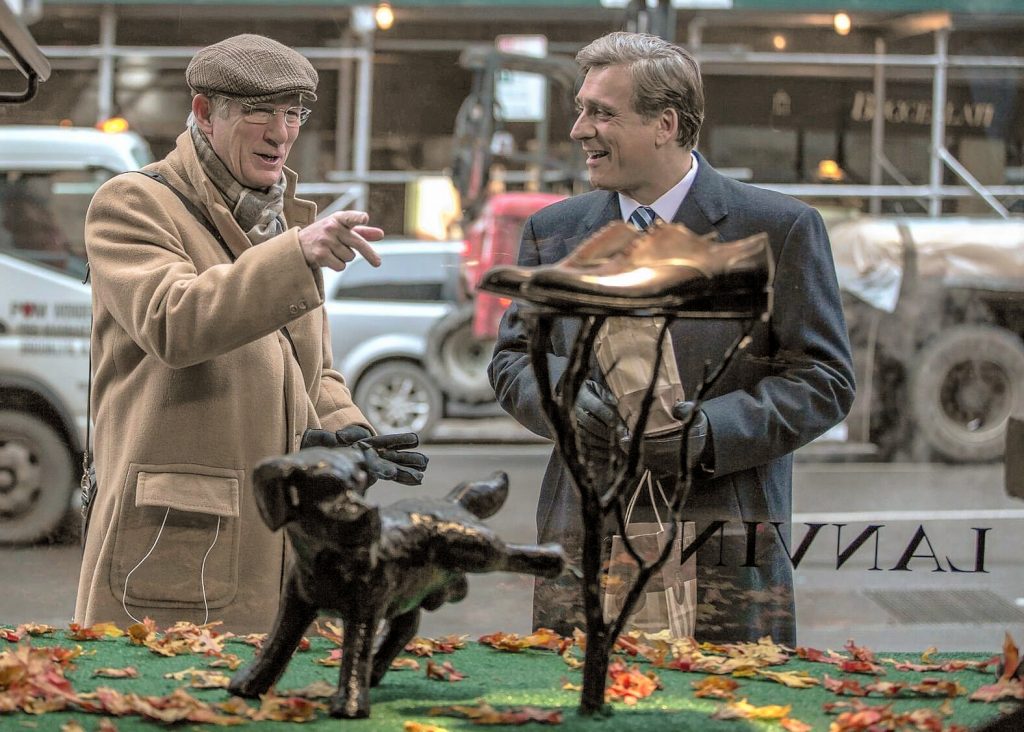 Top Photo: Richard Gere as “Norman Oppenheimer” on his way up an escalator. Photo by Chris Saunders.

Bottom Photo: Gere and Lior Ashkenazi as “Micha Eshel” first set their eyes on “the most expensive shoes in all of New York.” Photo by Niko Tavernise.