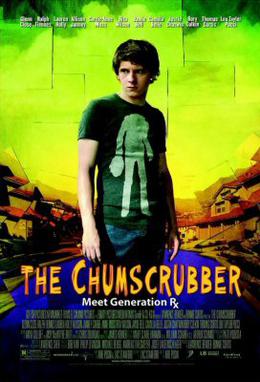 From Jan ’06 Spotlight: One of the best films of 2005 played at festivals and special screenings, including the one I attended at Facets last summer, but never opened in local theaters despite a huge cast of “name” actors including up-and-comers like Jamie Bell, Camilla Belle, Justin Chatwin, Rory Culkin, and Lou Taylor Pucci, as well as Boomers like Glenn Close, Ralph Fiennes, Allison Janney, Carrie-Anne Moss, and Rita Wilson. But on January 10, The Chumscrubber will be released on DVD, so watch for it.

The Chumscrubber was directed by Arie Posin, a young man whose parents fled the Soviet Union, so protecting the American Dream is serious business for Arie. When I called him in LA for details, he told me his father’s gravestone carries the words “Your children are free.” “His name was Moshe in Hebrew; it was always a family joke, a joke but with a hint of truth, that he was the Moses of our family because he brought all of us out.”

Unfortunately, audience response to The Chumscrubber has been mixed, but Arie remains philosophical: “Well, you know, when you make satire, not everyone is going to get it.” Nevertheless, “America was literally a beacon to my parents, and when I see someone or something messing with that image it concerns me deeply,” he continued. “The ideals that America represents, we must not forget them. I don’t think that there’s a simple answer. I’m very wary of both political parties. But I think that communication is the first step towards finding our way through it. There’s nothing that gets me as passionate as getting people talking about these ideas.”

For more of my interview with Arie, visit: www.films42.com/chats/arie_posin.asp