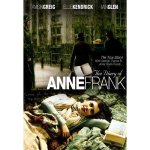 From Dec ’09 Spotlight: Britain’s BBC television network showed a new miniseries version of The Diary of Anne Frank to great acclaim last January, and it’s now available here on DVD as a 100-minute feature film. This is the third screen adaptation of Anne’s Diary I’ve seen, and I’ve also seen several stage versions, but even as familiar as I am with the material, I was still deeply moved. Director Jon Jones keeps a tight focus on life inside the Amsterdam attic in which Anne and seven other Jews hid for two years (from July 1942 until August 1944). “The Secret Annex” starts out claustrophobic, but it becomes so familiar (and dare I say “cozy”), that the abrupt arrival of the German Security Police at the very end is a visceral shock.

Adapting Anne’s Diary presents a narrative dilemma: how to sympathetically depict people who have become already become caricatures in the popular imagination? For example, Anne is very hard on her mother as well as the middle aged dentist with whom she shared a tiny room, so both Edith Frank and Albert Dussel must be extremely well-cast and their dialogue must be crafted with great care. Played here by veteran character actors Tamsin Greig and Nicholas Farrell, we can see their humanity as individuals even as we empathize with Anne’s teenage frustrations. Lesley Sharp as Mrs. Van Dann and Felicity Jones as Anne’s sister Margot also do wonders in their supporting scenes, and through it all Ellie Kendrick shines as Anne. (Screenwriter Deborah Moggach received an Oscar nomination for her 2005 version of Pride & Prejudice staring Keira Knightley, and this screenplay succeeds in similar ways.)

The is available for purchase from its American distributor at www.WellGoUSA.com, or from online sites like Amazon and Borders.