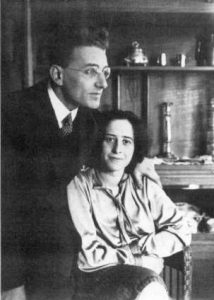 Jan Plans; God Laughs. I was in Chicago to give my annual lectures on Fiddler on the Roof for the Chicago YIVO Society’s 2013 Summer Festival of Yiddish Culture when I posted my review of Margarethe von Trotta’s film Hannah Arendt (which was opening in Metro Chicago that same week). I promised myself I would contact screenwriter Pamela Katz for an answer to “The Heidegger Question” as soon as I returned to Brooklyn… I didn’t… And years passed.

Somehow, I was certain that Pamela Katz would be there too. And I was equally certain that I would recognize her immediately, even though our sole “encounter” had been a telephone conversation about her film Rosenstrasse way back in 2004. I was right on both counts!

Barbara Sukowa and Ken Marks both gave brilliant performances, bringing emotional intensity to the erudite words of these two great Jewish thinkers. Afterwards moderator Roger Berkowitz (Founder and Academic Director of the Hannah Arendt Center for Politics and Humanities at Bard College) opened the floor for questions, and sure enough, one gentleman in the audience not only asked “The Heidegger Question,” but phrased it in an especially demeaning way.

I cannot give you an exact quote from him verbatim, I can only provide what I wrote down in my notes as he spoke. Here is what I heard him say:

Since Hannah Arendt was the mistress of Martin Heidegger, isn’t it possible that she was soft on Adolph Eichmann in Eichmann in Jerusalem because she wanted to rationalize the fact that she had forgiven Heidegger for becoming a Nazi?

Well, of course, that was my opportunity to contact Pam the very next day for her response. Note that I did a little bit of editing and also added some contextual information [in brackets]. But since this topic is so controversial, I asked Pam to approve this text prior to posting (which she has now done).

It’s an assumption (and a mistaken one) to say that Arendt’s theory of the banality of evil was a “defense” of Eichmann. That nonsense should just be put to bed and not given the dignity of an answer ever again. It’s so patently false.

Therefore, the idea that Arendt’s affair with Heidegger [which began when she was a student at the University of Marburg in 1924] led her to write something that “diluted” Nazi evil, is a mistake from the very beginning.

If one wants to say that her studies with Heidegger influenced her thinking, now that is an interesting argument. As our film “Hannah Arendt” quotes, she credited Heidegger with “teaching her how to think,” and at the center of her ideas about the banality of evil is the notion of being “unable to think.”

The relationship between thinking and evil is her notion that thinking gives us “the ability to tell right from wrong, beautiful from ugly. And this indeed may prevent catastrophes, at least for myself, in the rare moments when the chips are down.” This is a quote from her great essay “Thinking and Moral Considerations” which she proclaims in the speech that ends our film. If you can think deeply in the Socratic sense (and enter into a dialogue with yourself), then, she believed, you become incapable of committing evil.

Heidegger’s influence can be seen in that she used a term [thoughtlessness] to describe an “inability to think.” This wasn’t the way in which people usually use this word in English as her friend Mary McCarthy [the novelist and cultural critic] tried to tell her). It was instead a concept that required a philosophical background to understand. A bit much for a series of New Yorker articles! For her, the meaning was so self-evident that she was surprised people misunderstood. In a sense, her intelligence got in her way.

So yes, Heidegger had an influence on her, but it had nothing to do with Nazis and anti-Semitism [let alone sex]. It had to do with her method of presenting an argument.

And the heartbreak, as I hope Margarethe and I show in our film, is that she believed thinking would protect us “when the chips are down.” If an inability to think made it possible for Eichmann to do what he did, she had hoped the reverse—thinking—would make it impossible.

Yet in the case of Heidegger—the supreme thinker—it didn’t work. The beauty and force of thinking failed to rescue him from the Nazi evil. Heidegger was a tragic exception—and not the only one—and I believe that broke her heart. It was an intellectual heartbreak, not a romantic heartbreak.

Even as I post these words from Pam, which I believe are definitive, I know this will not stop some people from continuing to add a salacious sexual buzz to a highly abstract discussion. However, such coarse innuendo obfuscates rather than enlightens.

When Hannah Arendt arrived at the University of Marburg in 1924, she was 18 years old. By that time, Martin Heidegger was already 35. He was a well-regarded professor, hard at work on Being and Time (published in 1927), the book that would cement his reputation as one of the 20th Century’s great philosophers. He had married Elfride Petri in 1917, and he was the father of two sons, however, Hannah Arendt was not the only student with whom he had sexual relations. 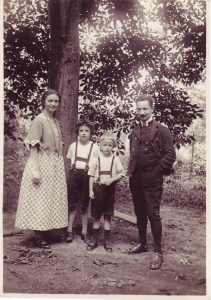 In contemporary lingo, then, in 1924, Martin Heidegger was an academic “Rock Star” with a known history of extramarital relations with students (and others). Hannah Arendt, meanwhile, was a college freshman from a sheltered home (and probably a virgin although I do not know this for a fact).

So to call Hannah Arendt the mistress of Martin Heidegger is preposterous. She was merely another one in a list of conquests. No “mistress,” no “affair,” just another girl who was seduced by a prominent man and then dumped.

I am sure she was heartbroken for a time. But after one year in Marburg, she spent a semester studying with Edmund Husserl (another one of the 20th Century’s great philosophers) at the University of Freiburg. Then she settled in at the University of Heidelberg, where she completed her dissertation under the direction of Karl Jaspers (well-respected but no rock star) in 1929.

Dissertation complete, she married Günther Stern—who had already finished his dissertation under the direction of Edmund Husserl—in 1929. They divorced in Paris in 1937. She married Heinrich Blücher in 1940. They fled from France together, arrived in New York in 1941, and remained married until Blücher’s death in 1970. She died in 1975. Hannah Arendt and Heinrich Blücher now rest side-by-side at Bard College.

Ah, but what happened in 1950? In 1950, Hannah Arendt returned to Germany to work on the recovery of Jewish art under the auspices of the Commission on Jewish Cultural Reconstruction. After debating whether or not to see Heidegger, she decided that she would. And after that visit, they kept in touch and she played a major role in arranging for the translation of his work from German into English which helped to rehabilitate his reputation. So was this the love of a woman for a man or the love of a student for a teacher?

From everything I have read, I agree with Pam’s statement above:

I don’t think Hannah Arendt was even remotely in love with Martin Heidegger when they met later in life. Hannah Arendt loved Heinrich Blücher.

Frankly, I think Martin Heidegger was damned lucky that one of his student lovers had become such a well-respected figure, and that her spirit was large enough to continue to value him as a teacher in spite of her enormous “intellectual heartbreak.”

When some people talk about Martin Heidegger now in this Hannah Arendt context, it’s as if they didn’t know that he is still considered one of the great philosophers of the 20th Century (and maybe they don’t). When he died in May 1976 (six months after her death in 1975), there was an obituary that began on the front page of the New York Times. Furthermore, the author of this lengthy obituary felt no need whatsoever to include her in the chronicle of his life. (To be fair, his name was not mentioned in her obituary either. For the record, her obituary began and ended on page 32, not front page news even though she had lived in New York for most of her adult life.)

However, even today (11/21/17), you will learn that Hannah Arendt had “long and problematic romantic relationship with Heidegger” on her Wikipedia page, but you will find barely a mention of her on his Wikipedia page.

My conclusion: It’s past time to confront the complexities of Hannah Arendt’s intellectual legacy head on. There is no need to continue to wallow in sexist blather. Martin Heidegger was Hannah Arendt’s teacher and thus had an indelible effect on her intellectual development. In the end, what could be more important to her than that?

Middle Photo: Martin Heidegger with his family circa 1925.

All photos downloaded from cyberspace. Note that I was not able to find a photo of Hannah Arendt and Martin Heidegger in cyberspace. 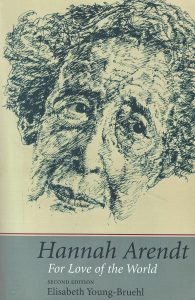 “Hannah Arendt always provoked strong reactions and intense criticism. I think that this is as much because of how she thought and judged as because of what she actually said, which has often been obscured by polemics.”

Hannah Arendt: For Love of the World

(Note that both photos of Hannah Arendt on this post are also in Young-Bruehl’s book.)